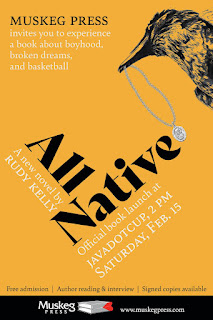 With the 2020 edition of the All Native Tournament almost set for launch next month in Prince Rupert, those attending the much anticipated event, as well as residents of the region at large will be able to spend some of their time absorbing the themes of a new book from Prince Rupert author Rudy Kelly.

Set to be launched next month by Muskeg Press is All Native, Mr. Kelly's work of fiction which is set with the All Native tournament as the background for a story that explores boyhood broken dreams and basketball.

In preview of the book, Muskeg Press offers up a snippet of some the current of the new work of fiction from the former Daily News Journalist and very active member of the city's arts community through Harbour Theatre and other ventures.

Nate Wesley dreams of basketball glory, hoping to make his dad proud by playing for the Prince Rupert Rainmakers, then in the All Native Basketball Tournament. But it's a long road full of dashed hopes and tragic circumstances, as his father, Frank, knows all too well. Along comes BJ, a boy unlike any Nate has met. Talented but lazy, loyal but reckless, good-hearted but rebellious, BJ walks a tightrope, and Nate's parents are caught between his charms and the dangerous track he may take their son on.

In their information release for the book Muskeg Press highlights the themes of the book set in Prince Rupert in the 1960's to the 1980's.

In his debut novel, Rudy Kelly spins a funny and poignant tale of boyhood, broken dreams, and basketball. Set in Prince Rupert in the 1960s to 1980s, All Native ﻿is a story of North Coast First Nations, a father, two boys, and the legendary tournament that binds them together.

To celebrate the launch of the book, Muskeg Press is hosting the official book launch on February 15th at 2 PM at Javadotcup.

Copies of the book will be available for sale, with Mr. Kelly to read some excerpts from his work and sign copies for those who may wish an autographed version.

To capture some of the excitement of All Native week in Prince Rupert, Muskeg Press and the author will have a booth as part of the range of displays set for the auditorium during ANBT 2020, with books available for purchase and signing in a pre-launch event from February 12 to 14.

Still to be finalized are opportunities to purchase the book following the tournament at local stores in the city.

You can learn more about the book and the events to come surrounding the launch from the Muskeg Press website. 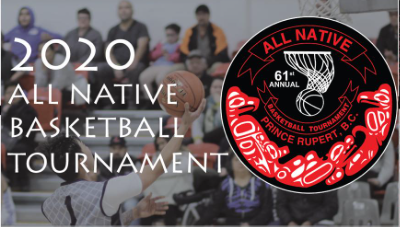 The 61st Annual All Native Basketball Tournament takes place from February 9th to 15th  all games will take place at the Russell Gamble Gymnasium and Civic Centre Arena in the Jim Ciccone Recreation complex.

For more notes on the tournament see the ANBT 2020 Facebook page, as well as our notes from our ANBT archive page.
Posted by . at 10:08 AM

Email ThisBlogThis!Share to TwitterShare to FacebookShare to Pinterest
Labels: New book All Native from Rudy Kelly set to be released next month