With STORM WARNING in place, BC Ferries revises departure from Skidegate for Tuesday sailing

As Haida Gwaii prepares for the latest Pacific front to arrive on its shores, BC Ferries has taken some proactive measures for their schedule of sailings, with a Service Notice announcement released this morning, advising of the shift of the departure of the Northern Expedition from Skidegate for Tuesday morning to 8AM.

The originally scheduled 10AM sailing has been moved up by two hours, that in order to get ahead of heavy seas and winds expected to arrive at Hecate Strait.

The New departure time of 8AM will make for a 3 PM arrival at the Fairview Terminal in Prince Rupert. 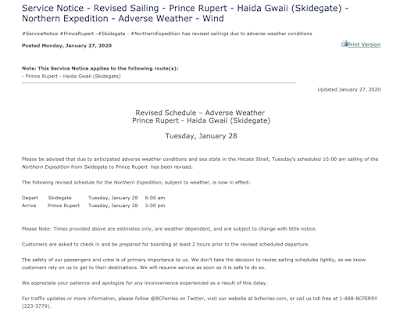 The delay for the departure comes with a STORM WARNING now issued for Hecate Strait, with Southwest Winds diminishing to 15 knots near midnight, slowly building again through Tuesday to reach 35 knots by the afternoon and then further up to 55 knots by Tuesday evening.

The seas will be 3 metres today, subsiding to 1 metre in the early Tuesday morning period and then increasing again to a maximum of 5 metres by Tuesday evening. 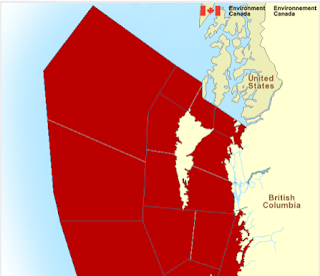 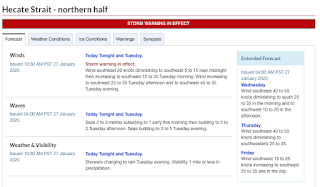 The pacific system will make its presence felt on the North Coast by Tuesday evening, with Rain and Wind in the forecast for the 48 hours or so following its arrival. 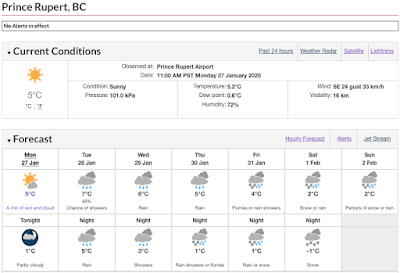 For updates on the Weather see the Environment Canada website.

The latest information related to the BC Ferries plans can be accessed from their Service Notices page.

For more items of note on Marine Transportation on the North Coast, Alaska and Haida Gwaii see our archive page here.

To return to the most recent blog posting of the day, click here.
Posted by . at 2:40 PM

Email ThisBlogThis!Share to TwitterShare to FacebookShare to Pinterest
Labels: BC Ferries schedule revision for Tuesday