Parts of Prince Rupert, including much of Downtown suffered power interruption Sunday afternoon

A good portion of the downtown core and other adjacent areas on the same electrical grid were knocked off line this afternoon with BC Hydro crews attending to a service call shortly after 3 PM.

The scope of the outage was found in the area bounded by Comox Avenue in the South to the North at Manson Way.  To the east the line between the powered and the non powered was just east of McBride, while to the west the power outage went no further than just before the Moresby Park area.

The cause of the incident was said to be a bird contacting their wires.

At the height of the power interruption, some 1300 customers had been affected, Hydro Crews had the power returned by 5 PM, posting their final update to the BC Hydro website at that time. 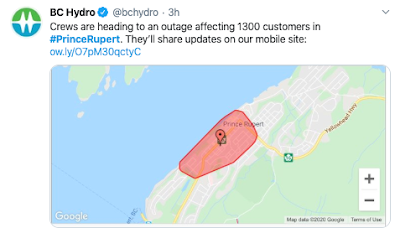 For a look at past notes on past Hydro outages see our archive page here.