Things apparently are not moving very fast when it comes to knocking off a conclusion to contract negotiations with the provinces public school teachers.

And while the two sides apparently meet from time to time,  the talks which began last Spring and continued through the summer, fall and now into the winter have provided for little in the way of information for students, parents and guardians who have a pretty vested interest in an outcome.

The last public update on the state of negotiations dates back to a notice on the British Columbia Public School Employer's Association website from mid December, when both sides met with mediator David Schaub to identify topics that the two parties would discuss in the New Year.

Almost one month into that new year, there has been little heard as to progress on the topics of concern and if any kind of settlement is within sight.

This week, some of the province's major columnists and commentators observed that they had been hearing word from sources inside the British Columbia Teachers Federation that the membership were considering some of their next steps to try and put pressure on the BC government to reach a settlement in the long running negotiations.

Such has been the speculation towards potential job action, that the BCTF took to its social media streams on Thursday to try to tamper down any anxieties over picket lines and cancelled classes. 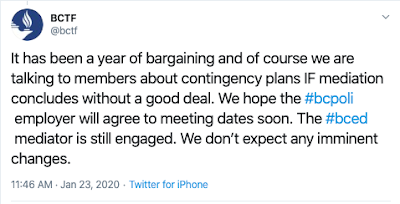 On the North Coast, there hasn't been much heard on the fate of the negotiations since the Prince Rupert Teachers and North Coast MLA Jennifer Rice exchanged notes on the state of local fruit options in the community.

The presence of the teachers information lines that had been set up at the MLA's Ocean Centre office in the early fall, also seem to have grown less frequent as the winter weather arrived.

Some of the recent notes from the provincial media on the dispute and where the path may lead next can be found below:

As the next steps come along, you can keep up to date on the status of the contract talks from our political blog D'Arcy McGee, as well as our Education negotiations archive page, which has charted the latest notes when the two sides had something to say.

Other items of interest on Education on the North Coast can be found from our Education archive, while items related to the provincial government can be explored through our Legislature archive.

To return to the most recent blog posting of the day, click here.
Posted by . at 10:50 AM