The City of Prince Rupert is apparently expanding its portfolio to become a landlord again, with the city adding to its holdings in the building leasing business, something which may come as a bit of a surprise for many of the community's residents.

The latest revelation on the city's portfolio coming from a Public Notice delivered to the  local paper this week, outlining how the City plans to sub-lease some warehouse space on the city's east side waterfront to the Prince Rupert Gymnastics Association.

The City's announcement of the proposed lease for the Association will be a welcome thing for Councillor Wade Niesh.

The Councillor has been a long time advocate for the Gymnasts ever since they were forced out of the Civic Centre in 2016, relocating to the Museum of Northern BC building.

Our look at the ambitious plan and call for community investors from the Prince Rupert Gymnastics Association can be reviewed here.

The prospectus is one which outlines the blue print that they have in place to transform the Canadian Fish Warehouse which once housed stack upon stack of canned salmon into the new focal point for the sport in the region.

It's a fascinating project that residents of the city no doubt will wish the Gymnasts well towards as they move forward with their plans.

However, a few comments from Mayor Lee Brain related to the lease should raise a few questions for the public and even make for a topic for the City's Council members to discuss at a public council session, should they wish to expand on the underwhelming benchmark for discussion found at the 415 second council session of January 13th

In comments for the Thursday edition of the weekly paper, in what to this point seems to be a print edition story only, Mayor Brain outlined his and City council's excitement for the leasing plan.

"Council and staff saw this unexpected opportunity as a way to obtain a new strategic waterfront asset and protect the community uses that currently benefit that area ... We believe having a new indoor space next to the revitalized Rushbrook Trail, the boat launch and Cow Bay down the road will be a great addition to the waterfront and fits into our newly formed 2030 Vision" -- Mayor Lee Brain on the city's interests in a warehouse on the east side waterfront

All fascinating themes and all topics that should have been discussed in a public council session, where the elected Council members and those on city staff  could share their observations, go on the public record and expand on how they believe the city's plans for the warehouse fits the public good.

They could also have explained for the public how much the city has paid for the property they now are leasing out, where in the civic finances that they took the money from for the deal and what the ongoing costs of maintenance for the warehouse will be and who will be responsible for them.

The newspaper article also notes that the the leasing plan is in collaboration with Canfisco, something that he city should perhaps expand on for the public, outlining some more details on what exactly that arrangement means and if it is an additional cost for the city.

But as often seems the case with this council, those discussions if they took place, appear to have been behind doors that they close to the public more and more these days.

The addition of another item to the commercial leasing portfolio, should  also serve as perhaps another chance for a wider overview of just what properties the City of Prince Rupert owns or leases and what revenues and expenses that they may deliver to the civic financials.

As the sole shareholder in what appears to be growing empire of Prince Rupert Inc., Prince Rupert residents and taxpayers,  might welcome a chance to get a glimpse at their holdings and review how the city is handling them.

The most well known of the city's properties and the one with the largest profile is of course the Watson Island Intermodal Trade and Logistics Park and that is a land holding that the public hasn't heard anything further on since the announcement of the Pembina lease of 2018.

Still, it seems that there are pockets of other investments all over the city that Councils and staff present and past have accumulated  over the years and perhaps the time has come for an update and full account of those holdings.

Something that would offer the current roster of elected officials and senior staff opportunity to provide some background on all of them for the public and outline how they fall into the scope of what this City Council believes it should deliver as service to the community.

As well as to review for the public how such transactions fit into the City Council priority list.

The other thing of note related to the newest of property moves by the city, is to reinforce the lack of information that they have offered to the community when it comes to this current Public Notice and those of the past.

Other than the apparent Community Charter requirement of the purchase of two advertisements in the weekly paper, there was no mention of the Notice through any of the City of Prince Rupert's growing list of information portals.

To this point, despite having a full time Communication Manager who one might think should provide some notes to the theme; the Notice does not appear on the city website, the City's Facebook page or the latest information tool for the city, the mobile app.

Nor does the topic even make for a conversation starter on the Mayor's own Facebook portal where he often speaks to civic initiatives.

In the ad that was placed in the paper, the last line of the notice states:

All enquiries concerning this proposed property disposition may be directed to Rosa Miller, Corporate Administrator, in writing via email to rosamaria.miller@princerupert.ca or via fax at 250-627-099 no later than 4 PM Friday January 31st, 2020.

Other than the plans for newspaper ads that may or may not be noticed by the public and considering the lack of public discussion on the project; City Council members seemingly must not want to over tax Ms. Miller with replies on the theme.

In the Prince Rupert Gymnastics Club prospectus which is dated January 16th, it's observed that the city had already agreed to the lease terms of their proposal; yet the public did not receive notice of the plan until yesterday. 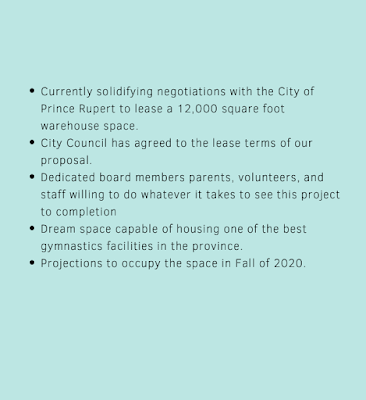 If the Council members still hold to the oft stated themes of transparency and accountability that they have made comment on in the past, then hopefully they will provide for a little bit of additional background for the public on their latest moves at their upcoming January 27th Public Council session.

That way the public could be just a little bit better informed on the topic, before that January 31st deadline for enquiries slips by.