After some highly entertaining games from Thursday to Saturday morning, the Senior Boys Rainmakers from Charles Hays finally ran into an unmovable force Saturday night, that in the form of the AAAA level Centennial Centaurs from Coquitlam.

A point in the game where the well rested Centaurs finally took charge of the match up, eventually putting enough distance between themselves and the team from the North to secure the 77 to 56 victory to wrap up the event.

It was a remarkable run none the less for the Rupert boys, who showcased some strong basketball skills in the final game and for all three matches previous.

The Rainmaker success began with an 83 to 77 victory over Walnut Grove on Thursday, a game which seemed to set the blue print for the Rainmakers who produced some good ball control and play making, never really looking to be in danger of letting the competitors overtake them on the score board.

That theme continued on into Friday when Charles Hays topped the host team from Vancouver College by a score of 69 to 57; with the Makers dominating much of the play and shutting down any thoughts of a comeback from the Vancouver squad.

Saturday morning provided for the most exciting game of the tournament for the Rainmakers, who battled a tough Abbotsford team back and forth for much of their semi final match up.

The play featured some fast paced offensive breaks and then smothering defence at times, with the two teams exchanging baskets at a frantic pace as the game ramped up, neither team allowing the other to run away with the pace of play.

The final few minutes of the morning contest offering up some heart stopping action and a down to the wire finish which saw the Charles Hays boys prevail with a 74 to 71 win.

That set the stage for the Saturday night finale and the number one AA ranked Makers held their own in the first half of play, but as the third quarter began the AAAA Centennial Boys a perennial force in BC High School Basketball began to take charge, building on their lead and shutting down the Rainmakers play making with great effect.

The Coquitlam Boys are one of the top tier teams in BC High Schoo Basketball and qualified for the Saturday night final following a 89-57 victory over Terry Fox on Friday evening.

Thus they were able to put a rest of almost twenty four hours to good use, with a well developed playbook and some fresh legs serving to keep the Charles Hays push at bay all the way to the final buzzer.

In addition to the flurry of games towards the end of the tournament, the Rainmakers were also without the skills of Rylan Adams for the final two games of the event, an offensive force who's absence was prominent in the post score sheet summaries.

Such was the impression that the Rainmakers made on the tournament however, that a pair of players secured honours at tournament end.

While both Jones and Kai Leighton were named to the First All Star team for the tournament. 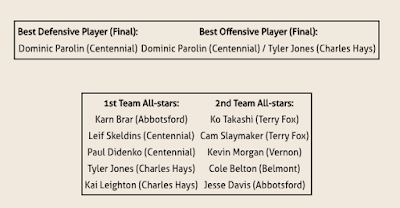 The trip south certainly provided the team with some top end competition and also will once again put the Charles Hays program in the spotlight for basketball followers in the Lower mainland area.

As well, the level of play they delivered at the tournament will not be lost on the number of college and university scouts that may have taken in the Vancouver tourney, one of a number taking place in the Lower mainland this weekend.

Some notes on the competitive Vancouver basketball scene can be found rom the blog Varsity Letters.

You can review some of the game action from the weekend by way of the Vancouver College Video archive page here.

Up next for the Senior Boys is some weekend basketball at the Charles Hays gym, with the Prince George Secondary set for a trip to the North Coast and two games  on January 31st and February 1.

For more notes on our look at the tournament from last week see our Charles Hays Sports archive page here.

To return to the most recent blog posting of the day, click here.
Posted by . at 10:14 AM