Lead concerns at SD 52 schools rekindles attention to ongoing issue: A look back at some of the focus of the past

An announcement rolled into the review of the first SD52 Board meeting of the year, has put the state of the water in local schools and buildings into the spotlight once again, with the School District once again reminding staff and students as to which sources of water in the schools should be used on a day to day basis.

The brief observation noted that the allowable limit for lead had reduced by 50% and noted how flushing of the water lines is not an effective approach to the reduction of the amount of lead in the water to reach the new limits in place.

The new update also introduced a new discussion point, that of the presence of coppery in the water and new limits related to testing for it.

In addition to the brief notes from the January 14th Board meeting, the topic gained a mention through a notice posted to the SD52 website. 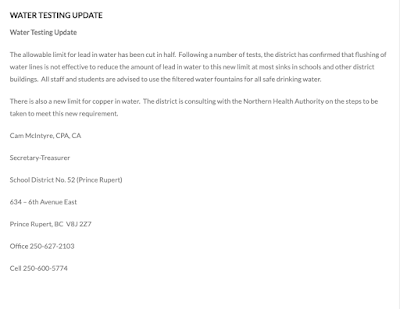 So far, there hasn't been much in the way of further information from the School District when it comes to steps towards improving the situation, beyond the posting of advisories and the desire for further consultations with Northern Health that have been indicated to this point.

Nor has MLA Jennifer Rice outlined if any plans from the Ministry of Education are in motion towards remediation of the ongoing issues, themes that at one time had the MLA's full concentration back in her days of opposition.

What might be helpful for parents, guardians, staff and students would be a more expansive review of the situation to this point, as well as what potential solutions are out there that both the School District and Provincial government may be able to put towards resolving these long running issues.

For the most part, the topic seems to have fallen off the SD52 public radar from 2017-2019, with no notes released on the theme of water issues during that period.

A look back at how the topic has dominated some of the discussion back in 2016 can be found below:

Prince Rupert's elevated lead level concerns made for some extensive study in the fall of 2019, that after a consortium of media groups and journalism students delivered a range of stories on items of note for the North Coast.

More notes on items of interest from SD52 can be found from our archive.

Email ThisBlogThis!Share to TwitterShare to FacebookShare to Pinterest
Labels: Lead advisories an ongoing theme for SD52