The strong winds that have been buffeting Prince Rupert for much of the day are leaving a few stories to tell behind them, that as the particularly nasty weather system prepares to make its departure from the region this afternoon.

As we noted yesterday, Environment Canada issued its latest WIND WARNING for the community on Wednesday afternoon, noting that strong winds would be arriving in the community in the early morning of Thursday and continuing on through the day, and for much of the day the winds have delivered as promised.


The day making for reports of toppled trees as well as some collateral damage for fences and sheds.

Along the way Rupertites had a look at some pretty fine looking chop on the harbour and began the chase for garbage cans around city streets as the gusts would roar around the city.

In fact, the winds were such, that the City of Prince Rupert closed the landfill site for the day as a result of the ongoing wind event in the region. 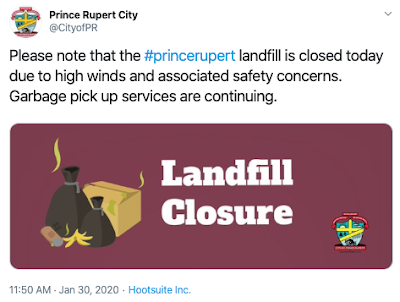 Update: the City reopened the landfill site at 3 PM

Transportation was also impacted by Thursday's Wind Event, passengers travelling on the morning flight into Prince Rupert were on notice from Air Canada, that should the winds continue to be at top levels than they would most likely be making a return trip to Vancouver.

Fortunately, the scheduled arrival, while about twenty minutes behind schedule at the Digby Island Airport came as a lull in the storm was in place; allowing for the landing for the Rupert bound passengers and the take off for those heading to Vancouver for the day.

Transportation to and from Digby Island was however affected during the height of the weather, making for delays to the ferry transportation across the harbour and back.


BC Ferries also had a Notice for travellers in place, with the Ferry service holding in Port in Prince Rupert, delaying its 10 AM departure for Haida Gwaii. 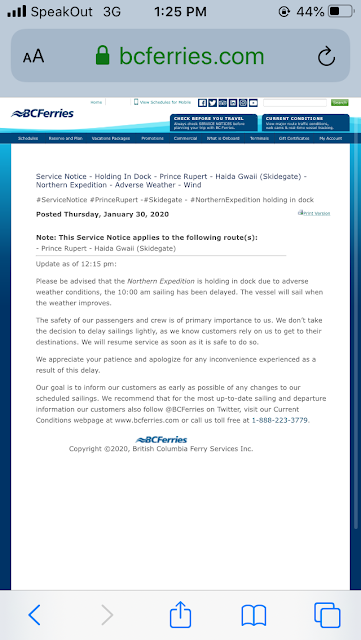 With the all clear  heard shortly after 1:30,  the ships crew prepared for sailing, with The Northern Expedition finally getting underway at 2 PM as the vessel made its way out of Prince Rupert harbour destined for Skidegate with a four hour delay now behind it.

The hum of machinery at the Fairview Container Terminal was on hold at times as well during the course of the worst of the wind event, though by 2 PM this afternoon, things were ramping up again on the West side waterfront.


With the worst of the winds and rain now in the past, some blue patches were  arriving from the West  just over the horizon past Dodge Cove and Digby Island, offering an indication that the worst of the days wind event was now in our rear view mirror.

As of 2:30 PM the WIND WARNING was still in place for Prince Rupert, but with conditions diminishing through the afternoon, it seems likely that warning will be discontinued shortly.

Update: as of 4PM Environment Canada had ended the Wind Warning for Prince Rupert.

For more notes on past weather events see our archive page here.


To return to the most recent blog posting of the day, click here.
Posted by . at 2:40 PM

Email ThisBlogThis!Share to TwitterShare to FacebookShare to Pinterest
Labels: Wind event buffeted Prince Rupert for much of Thursday