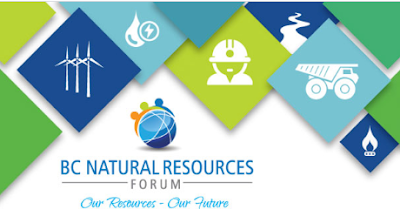 Mayor Lee Brain is on the road this week, attending the annual BC Natural Resources Forum in Prince George, the three day event which got underway on Tuesday and will wrap up with its final sessions through the day today.

In addition to taking in some of the workshops, keynote addresses and other forum activities the Mayor and his partners in the Northwest BC Resource Benefits Alliance managed to get a few minutes with Premier John Horgan and Energy Minister Bruce Ralston.

Conversations where as the Mayor notes they discussed plans towards a long term revenue sharing agreement with Province of British Columbia.

Through his Facebook portal, Mayor Brain made note of the session with Mr. Horgan on Wednesday night, relaying some themes of the work of the Alliance and some of the challenges that they hope to work towards should they receive additional funding from the province. 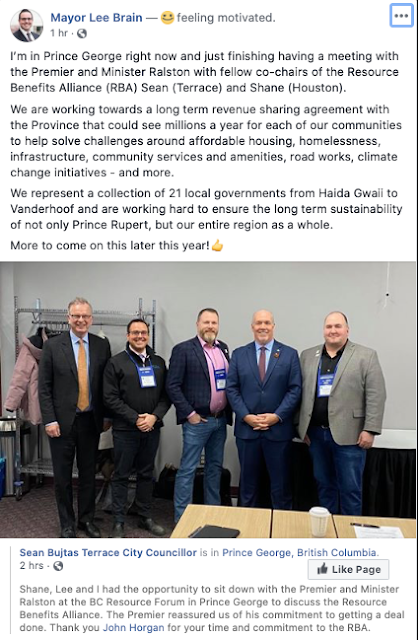 In his comments, Mr. Brain didn't have much to share when it came to the most recent discussions with the Premier, but he did observe how there will be more on the RBA plans to come later this year.

The work of the collective has been a long running mission, first brought to the attention of the public back in January of 2015.

That is when Mayor Brain, following up on the ground work in place from former Mayor Jack Mussallem,  brought Prince Rupert into the membership.

Since then there have been many discussions on their plans, along with with the province providing for some additional funding towards their work.

Though so far, when it comes to the implementation of an expansive revenue sharing plan for the region, the delivery on their goal has to this point proven to be a bit elusive for the Northwest representatives.

You can track some of their past work from our archive page here.

As for the BC Natural Resources Forum, Mr. Brain was not the only Prince Rupert representative to be found around the convention hall, with the Port of Prince Rupert's Maynard Angus part of a discussion panel that explored themes of prosperity through partnerships. 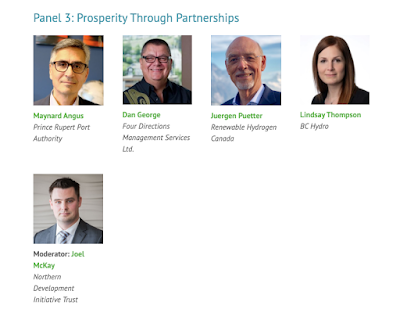 You can review more background on the three day event in Prince George from the BC Natural Resources Forum website.

Owing to his travels, the Mayor was not in attendance for the Monday Council session at Prince Rupert City Hall.


To return to the most recent blog posting of the day, click here.
Posted by . at 11:18 AM