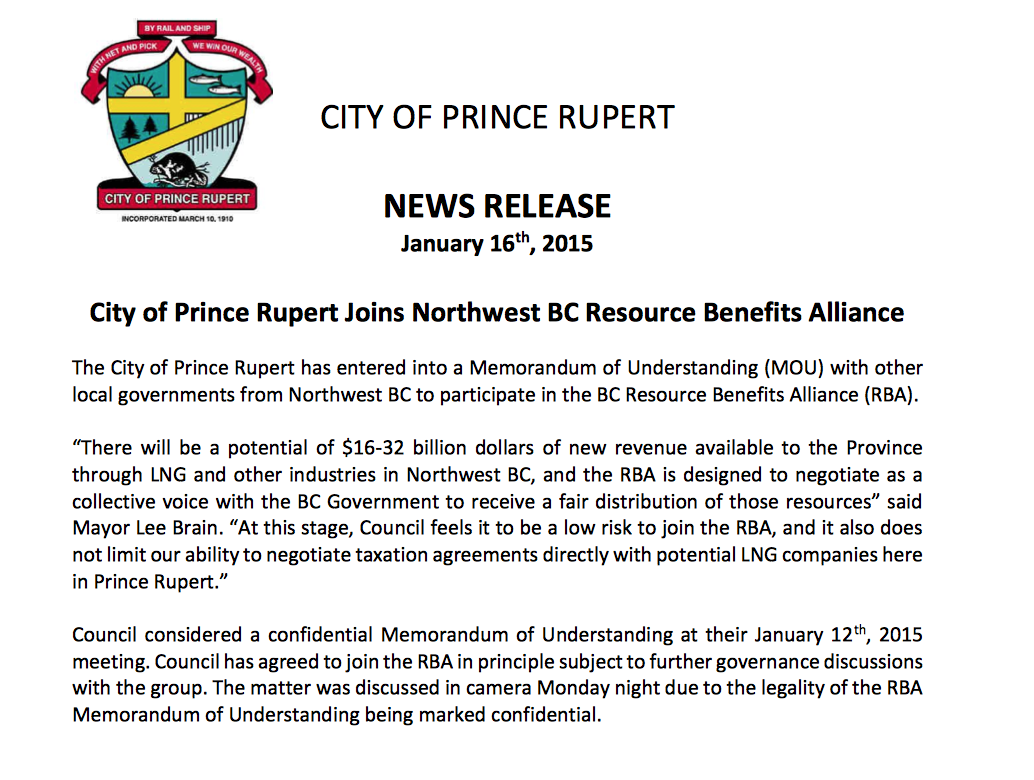 The City of Prince Rupert revealed on Friday that the City will be joining the ranks of the Northwest BC Resource Benefits Alliance, a group of municipalities across the Northwest that are working together to in a collective fashion, so as to gain benefit from all of the development currently underway, or proposed for the region.

In a Media release from Friday, the City provided notice that it had entered into a Memorandum of Understanding with the Northwest Alliance, with Mayor Lee Brain providing some background to the main points of interest for the City regarding the Alliance and what the City hopes to achieve from it.

“There will be a potential of $16-32 billion dollars of new revenue available to the Province through LNG and other industries in Northwest BC, and the RBA is designed to negotiate as a collective voice with the BC Government to receive a fair distribution of those resources”  ... “At this stage, Council feels it to be a low risk to join the RBA, and it also does not limit our ability to negotiate taxation agreements directly with potential LNG companies here in Prince Rupert.”

Council considered the topic during a Closed session of their January 12th council meeting,

As we outlined earlier this week, Council added on that closed session in the final moments of the Regular Council session.

At that time, no indication as to the topic for that closed session had been outlined either through public notice on the City's website, or by way of Council discussion at the end of the regular session.

The News release of Friday, would appear to be Council's bid to do some back tracking to address that glaring lack of information  and notification at the time.

With the City Providing as an explanation the "in camera" nature of those discussion, highlighting the confidential nature of the Memorandum of Understanding.

With the Friday RBA agreement in principle announcement now in place, Council outlined that further discussions with the RBA will now move that process forward.

It's not stated in the Media release of Friday whether Council intends to bring the topic back to a public forum of regular council for further discussion by Council members.  A process which would offer up the opportunity for the new Council to outline their thoughts on the Memorandum of Understanding agreed with the Northwest BC Resource Benefits Alliance.

Back in the fall of 2014, during an October 20th presentation by the group to Council, Councillors Kinney, Cunningham and Thorkelson all had a number of questions regarding the proposed membership.

Considering the surprise nature of Friday's announcement Prince Rupert residents most likely would like to know more about their opinions, as well as of the thoughts of the newcomers to Council about the project.

Not to mention if the City would like to disclose more information for the public, as to what benefits may be achieved and if there are any associated costs in the new venture.

To find out more about the Resource Benefits alliance see their information page here, to review some of the past discussions on the topic from the past Prince Rupert Council see our archive pages below.