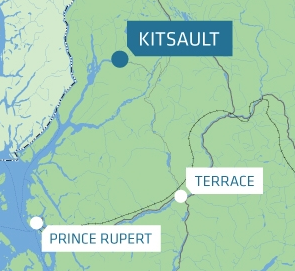 Of the eighteen proposed LNG terminals that are on the drawing board for the province, most British Columbians probably weren't anticipating that the first announcement of a Final Investment Decision would come out of a small, isolated Northwest community.

Krish Suthanthiran, President of Kitsault Energy and the proponent of an LNG terminal development in the abandoned community has declared his project ready to go, giving what appears to be the exclusive details of his Final Investment announcement to the Alaska Highway News.

And while the company may suggest that they've made their decision, there are still a few hurdles in the way it would seem.

Such things an environmental assessment process, consultations with First Nations, a pipeline, some natural gas commitments, shipping arrangements and global contracts for delivery.

All key ingredients for any LNG project, with few details delivered to date as far as a timeline when it comes to the proposal.

Interestingly enough there is no mention of the step forward of the Final Investment Decision for Kistault Energy made on the company website.

Through that portal, the company still appears to be soliciting the interest of Energy producers and First Nations partners through links on its website.

The Kitsault LNG project first came onto the radar a few years back, part of a shift in direction for the abandoned community site, which at one time was destined to be some form of environmental vacation spot.

More recently Avanti Mining detailed plans for a return to molybdenum mining in the area, though Mr.  Suthanthiran is not involved in that proposal and suggests "it's not a viable project".

A BC Business item from 2012, highlighting the difference in opinion when it comes to the future of Ktisault.

The LNG proposal for Kitsault was launched in 2013

Yesterday's announcement, will it appears forever record Kitsault Energy as the first of proposed projects to make a "Final Investment Decision".

Time however, will be determining factor as to whether Kitsault Energy is the First to the finish line when it comes to building a terminal, turning on the power and shipping LNG to world markets.

You can review the background on Kitsault Energy from our archive page here.

Email ThisBlogThis!Share to TwitterShare to FacebookShare to Pinterest
Labels: January 2015, Kitasult LNG says its ready to go but questions aplenty