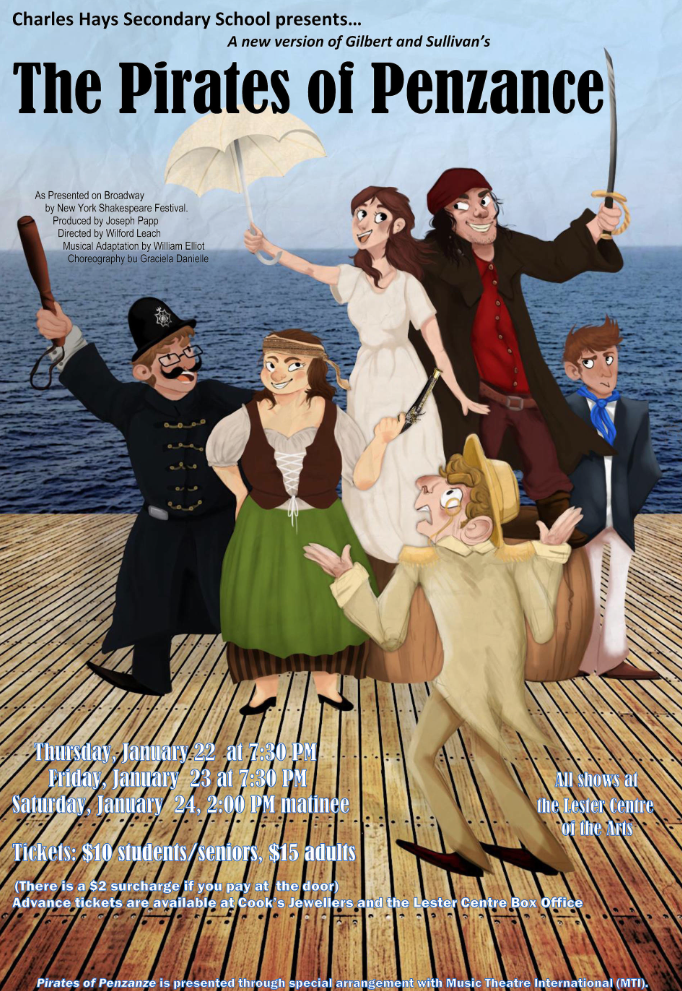 In just seven days, audiences taking to their seats at the Lester Centre will be whisked away to the rocky shores of Cornwall, eavesdropping on the twisting path that Frederic has taken, all part of his life of apprenticeship with the Pirates of Penzance.

Next Thursday night, the curtain rises on the latest highly anticipated presentation from Charles Hays Secondary School, as Alison O'Toole's cast and supporting crew take on a new version of the ambitious Gilbert and Sullivan classic the Pirates of Penzance.

Featuring a cast of 24 Grade 9-12 students at Charles Hays and musical accompaniment from a band of fourteen, that mixes both students at CHSS and from around the community, this years tradition of musical theatre continues on, if a little later than the usual annual schedule provides.

The annual musical production normally holds down a key spot in the pre holiday schedule of December on the Lester Centre calendar.

However this year, with the late start to the school year, the production debut has shifted by a month, taking place on January 22nd.

Auditions for parts and rehearsals for the presentation started in early October, with the scope of the production reaching far beyond just those who Rupertites will see on the stage starting next Thursday.

Charles Hays Drama Coordinator Alison O'Toole highlighted the combined efforts of many at the school from  current and former staff members at CHSS, to a number projects taken on by those in the textiles, art, media arts and shop classes at the high school, all who have made contributions to the production.

Set making and painting was the domain of the cast and crew for the most part, with some assistance from parents of those involved in the upcoming shows.

Former drama students have also returned to lend a hand, providing their assistance when it comes to choreography and singing.

On site at the Lester Centre, the production has once again received technical assistance from James Carlson, who as in the past, kept the pace of set up on track for next weeks opening night.

Ms. O'Toole credits the strong attachment of the community to the arts for the support and involvement that the CHSS productions find from residents of the North Coast.

Local theatre fans mark the CHSS productions on their calendar as soon as word is delivered as to the presentation to be taken on, Alison O'Toole year after year has pulled the most out of her cast and crew, the track record an impressive one.

In one week's time, theatre fans revel in the life of pirates and add one more production to the list of high calibre entertainment that marks the ongoing success of the CHSS drama department.

Tickets for production cost 15 dollars for adults, 10 for students and are available in advance at Cook's Jewellers and the Lester Centre of the Arts.

For those that are last minute theatre goers, tickets purchased at the door at show time, will have a two dollar surcharge.

Pirates of Penzance runs January 22nd to 24th, show times Thursday and Friday feature a start time of 7:30, while Saturday's show has an opening act debut at 2 PM.

For those with a special interest in the work of Gilbert and Sullivan, tonight and tomorrow features an opportunity to learn more about their work.

Michael Gurney, Director of last year's community theatre presentation of Les Miserables (and more recently hailed for his dramatic readings of Rotary Auction items) will be presenting two lectures on the work of the famed composer and lyricists.

The Pirates of Penzance primer takes place in the lobby of the Lester Centre, Michael Gurney's presentations take place starting at 7 PM tonight and tomorrow.

Email ThisBlogThis!Share to TwitterShare to FacebookShare to Pinterest
Labels: CHSS to present Pirates of Penzance at Lester Centre Jan22 -24 2015