The ever growing list of road maintenance issues made for a discussion topic at Monday's City Council Session, and while the introduction of the theme appeared to make for a good chuckle for those gathered in the Council Chamber, Councillor Nick Adey noted that it was current and important issue for some residents,  relaying some of their concerns over the rather grim state of the road infrastructure in the city.

Noting that the winter weather has taken a bit of a toll on the roads, the Councillor asked a few questions of City Manager Robert Long, inquiring as to whether there is a plan to move forward towards some of the more egregious potholes that have been reported to date.

"Yes, we will be fixing potholes, I think it's important for Council to recognize that when you have a thaw/freeze cycle as we have had this winter; which is quite unusual, it causes substantially larger and more difficult potholes just because of the weather, there's no way around that.

We typically don't have these freeze/thaw cycles and if you're familiar with living in other parts of BC you will recognize that a lot of the potholes are generated through winter because of that process, and we've gone through that in spades this year and as result we will have a lot more of them to fix when the time comes"   -- City Manager Robert Long

For his contribution to the discussion, Councillor Niesh noted that the city crews had been out attending to the more critical ones and expressed hopes that come the spring the City would have a full paving crew out to address road issues further. 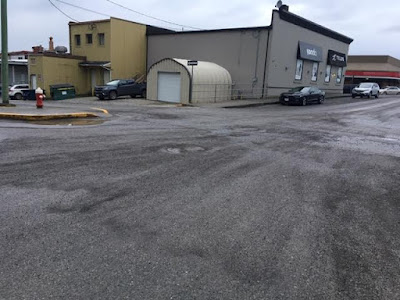 And while it is clear that the recent weather has made for some additional troubles for the roads, as many drivers could attest to for Council if asked, the roads were really not in the best of shape well before the winter months arrived.

From west side to east, and through the downtown core, there are a number of locations to be found where the roads have long needed some maintenance prior to the cold weather months.

We made note of some of the issues with the city's roads back in October, observing at the time that the Council may want to have asked the City Manager for an update on the success of last years million dollar paving plan.

Such a review would make for a helpful guide for residents to gain a better understanding of the work done so far on road infrastructure, as well as to where the challenges may yet remain.

You can review the discussion on the roads from the City's Video archive starting at the one hour, twenty three minute mark.


For more items of interest on the topic of the civic infrastructure see our archive page here.

More notes related to Monday's Council session can be found from our Council Timeline feature.

A wider overview of Council discussion themes is available from our Council Discussion archive.

To return to the most recent blog posting of the day, click here.
Posted by . at 10:43 AM

Email ThisBlogThis!Share to TwitterShare to FacebookShare to Pinterest
Labels: Potholes on the topic list from Monday's council session