Brookswood Secondary Bobcats on a Barnstorming Hoops tour of the Northwest

A opportunity to take on some top tier southern High School basketball competition is underway for this weekend, with the Senior Boys Bobcats of Brookswood Secondary in Langley making a barn storming tour of Terrace and Prince Rupert.

The first game of their tour took place on Thursday in Terrace as the Kermodes of Caledonia topped the Brookswood squad by a score of 64-59.

The Langley team which is ranked at number 8 in AAA High School ball, now charts its course for a pair of games in Prince Rupert as they head for the Charles Hays Gymnasium and a match up with the Senior Boys Rainmakers.

Two games are on the schedule for the Prince Rupert Stopover, with tip off tonight at 7 PM and again on Saturday at noon at 12.

Tickets are Five Dollars for Adults, 2 dollars for students.

The Brookswood boys then head back to Terrace for a Saturday night wrap up to their tour with another match up with the Kermodes. 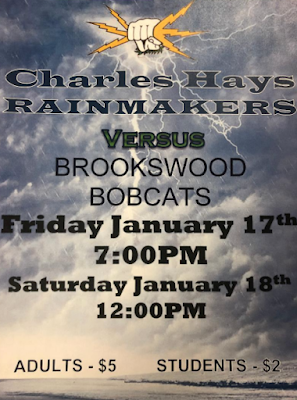 As the BC Sports resource Varsity letters notes, the Rainmakers head into the weekend once again as the Top Dog in AA High School Basketball, holding firmly onto their Number One spot for yet another week, that following the January 15th rankings release.

Their hold was no doubt solidified following their success in Prince George last weekend when the coaching Bishops and their Senior Boys claimed top spot in the Prince George Polar Clash tournament. 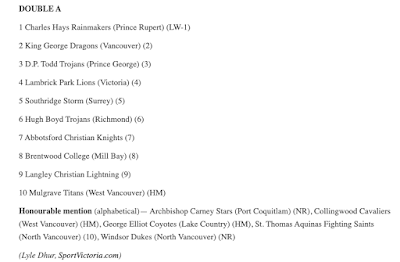 While the Senior Boys are hosting their guests from Langley, Kevin Sawka's Junior Boys will be making the trip to Terrace for play at Caledonia.

The Junior Boys are chipping away at an entry of their own to the Top ten rankings, most recenlty listed with an Honourable mention from the January 15th listings. 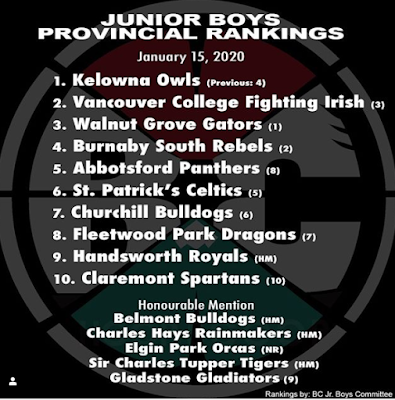 You can find more notes on the Charles Hays sports scene from our archive page here.