NDP shuffle the cabinet as Premier Horgan re-assigns some duties

John Horgan has tweaked his starting line up today, with the Premier making a few changes to the make up of his cabinet, assigning new duties for  three ministers for 2020.

Among those making for the shuffle were:

Anne Kang who has been appointed Minister of Citizen's Services.

Bruce Ralston rounds out the changes, appointed as the Minister of Energy, Mines and Petroleum Resources.

“These ministers will work hard every day to deliver sustainable economic growth that provides good jobs, a better quality of life and a stronger province for people in every region. I am confident they will put their knowledge and energy to work for people, as we focus on building an economy that works for everyone,” Premier John Horgan

The complete overview of the shuffle and some background on the Ministers and their new duties can be reviewed here.

North Coast MLA Jennifer Rice did not get a bump up to Cabinet status with today's shuffle, retaining it would seem in her current position as Parliamentary Secretary for Emergency Preparedness.

She did however pass on her best wishes to Ms. Kang on her appointment today. 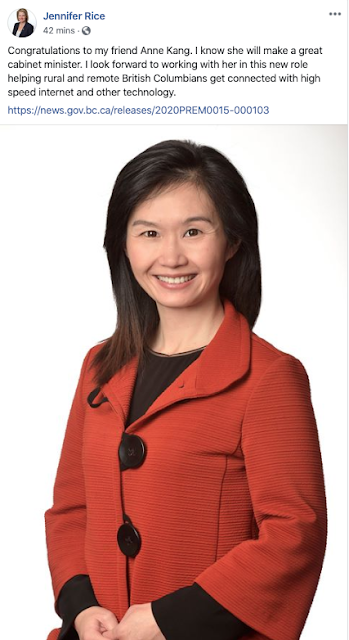 In the notes from the Premier on today's cabinet shuffle, it was once again observed that the British Columbia cabinet remains gender neutral.

When it comes to the important decision making in Victoria, the Executive Council of the BC government will look as follows: 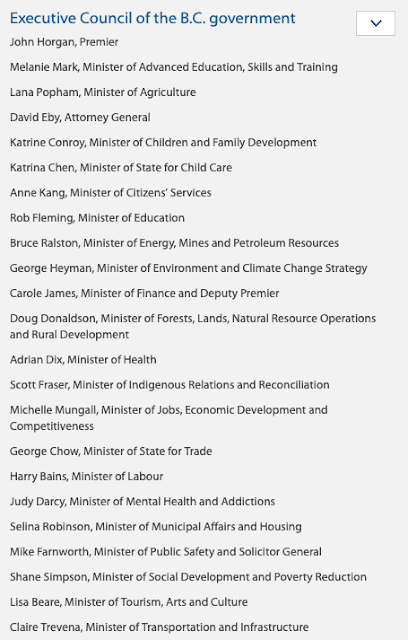 For more notes related to today's cabinet shuffle see our political Blog D'Arcy McGee later tonight for a recap of all the media notes on the day's events.

For more items of interest related to the British Columbia Legislature see our archive page here.

To return to the most recent blog posting of the day, click here.
Posted by . at 10:29 AM