That as the Minister of Transportation and Infrastructure makes plans to take part in a wide ranging community engagement process towards a future vision for coastal ferries.

In an information release from this morning, the Government outlines the travel schedule for the community engagement plans with stakeholders set to meet in a number of coastal communities, with the only stop remotely close to Prince Rupert that of Haida Gwaii.

According to a CFNR report today, Ms. Travena was there this week, in a little advertised engagement to hear of a number of concerns related to travel between Prince Rupert and Skidegate.

As part of the plan to develop a Coastal Ferry Service Vision for the future, Ms. Trevena will also pay visits to stakeholders in Nanaimo, Victoria, Vancouver, Salt Spring Island, Comox and the Sunshine Coast. 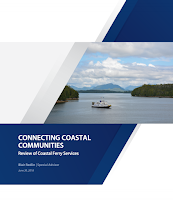 The desire for stakeholder sessions was one of a number of recommendations that were featured in the Connecting Coastal Communities report.

As part of the process announced today participants will be invited to share thoughts on a number of themes related to ferry transportation in the province, including such areas as:

In the roll out announcement for the program which you can review here, Ms. Trevena noted how the vision forming project is designed to give British Columbians a say in the future of coastal ferry transportation.

“Decisions on transportation investments have long-lasting impacts – that’s why it’s important that the people of British Columbia should have a say in the future of coastal ferry transportation.

Our government has restored 2,700 ferry sailings, reduced and frozen ferry fares and amended legislation, all of which are resulting in benefits to communities.

Our next step is to develop a broad provincial vision so we can be sure that we have the right ferry services in place in the future.”

Yet, Prince Rupert, which is a coastal hub for two routes of the BC Ferries system and the key connection to the Highway 16 corridor and beyond; seemingly is not to be part of the planning for a personal visit by the Minister.

Instead, North Coast residents can apparently take heart in the opportunity to make use of an online engagement process that will be launched sometime in the new year.

During the NDP's years in opposition, Ms. Rice frequently made mention of how the then governing Liberals were not particularly good at consulting with the residents of the North Coast, particularly when it came to transportation and other key issues that had a direct impact on the communities of the region.

However, since the NDP took office just over two years ago, the same pattern for any cabinet minister engagement has for the most part continued.

With more and more often it seems Cabinet Ministers following somewhat the same road map as before, with trips to Terrace, Kitimat, and other regional centres making for the destination of choice.

That's something that Prince Rupert City Council may want to take up with the MLA, offering up a friendly reminder that a good portion of her constituency (and votes) comes from the urban area of the city.

For now though, once again, when it comes to this latest round of engagement with as MLA Rice might put it "Your Government", Prince Rupert residents have been left on the dock, watching as the good ship SS Trevena sails by.

More items of note out of the Legislature can be found from our archive page.

Email ThisBlogThis!Share to TwitterShare to FacebookShare to Pinterest
Labels: BC Gov't consultations on coastal ferry service