The prospect of trying to get a reduced rate for North Coast residents for travel on BC Ferries made for a short discussion at Prince Rupert City Council on Monday evening, that as Councillor Barry Cunningham made note of his recent travels to Vancouver for a BC Ferry Advisory Committee meeting.

As part of his overview of some of the themes from the meeting, the Councillor raised a topic for action on the local level. With Mr. Cunningham seeking a letter from the City to be directed to the Province's Transportation Minister Claire Trevena; a correspondence that will ask that Prince Rupert be added to the list of communities which receive a resident's rate for travel on BC Ferries.

As he explained it Monday evening,  other residents of the North Coast such as Haida Gwaii receive a "resident's rate", where they pay the winter rate for travel year round. What Cunningham would like to see for Prince Rupert and the surrounding area,  is a similar arrangement here, that would allow for a less expensive rate for winter travellers.

"What I proposed is that because of the conditions of our highways in the winter and that, that the transportation minister look at a reduced winter rate for residents of the North Coast, Prince Rupert and the villages around here and that. For travel from Prince Rupert down south, so that they have a choice or either driving, or taking the Ferry that is affordable" -- Councillor Barry Cunningham, seeking a resident rate for North Coast residents for travel on BC Ferries 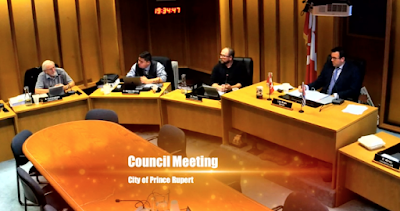 Mr. Cunningham, noted on the high cost of travel at the moment on BC Ferries and also observed that the City could also suggest that the resident rate be put in place for summer travel, which would allow local residents to travel to Haida Gwaii.

Mayor Brain, observing that he thought of the suggestion as a great initiative, also suggested that Council put the topic as a Notice of Motion for the next Council meeting. Which will allow Council opportunity to work with staff on the drafting of the letter and its approval at that meeting.

While they are in a letter writing frame of mind, City Council may wish to inquire of the Transportation Minister as to why she decided to not include Prince Rupert in her upcoming plans to consult communities on the future of ferry transportation in the province.

As we noted on the blog last Friday, the Province's engagement process will see Transportation Minister Trevena speak with officials in a number of coastal communities, including on Haida Gwaii.

However, despite the fact that Prince Rupert is a hub for BC Ferries in the region,  this community is not listed on the in person consultation list; though residents who may have some thoughts to share on the future of ferries will be able to take part in some kind of online engagement, anticipated to be revealed at some point in the future.

Why Prince Rupert did not factor into the travel agenda for a ministerial visit, might be a theme Council can also raise with MLA Jennifer Rice; who has often spoken of the importance of marine transportation for the North Coast.

You can review Mr. Cunningham's notes for Council of Monday from the City's Video Archive starting at the thirty four minute mark.

A look at some past BC Ferries notes for the North Coast and Haida Gwaii can be found from our archive page.

For more notes on Monday's Council session, see our Council Timeline Feature, a wider overview of some past council discussion themes can be found from our Council Discussion Archive.

Email ThisBlogThis!Share to TwitterShare to FacebookShare to Pinterest
Labels: Council to seek residents rate for travel on BC Ferries