As Minor Hockey Season moves into full speed, the PeeWees may have more than hockey on their minds 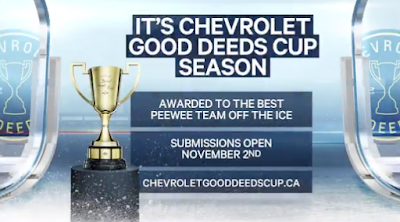 With Prince Rupert set to be the centre of attention on December 8th through the Rogers Hometown Hockey Tour broadcast on Sportsnet, this might be the year for Prince Rupert Minor Hockey to put a push on a national program that rewards team building at the Pee Wee level.

The program is called the Good Deeds Cup and over the last three years it has seen community after community salute the extra effort that young hockey players have made off the ice towards their hometowns.

The last three years have seen the Cup awarded to recognize the extra effort of the minor hockey players in their community.

Last year, it was awarded to the West Carleton Warriors in Ontario, who helped with the recovery efforts for a town struck by a tornado.

The 2017-18 Cup went to a team in Manitoba, The Pas Huskies who rallied the community to help save a local shelter from closing before the holidays. 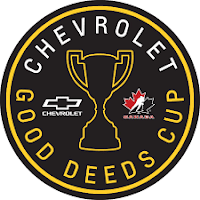 The inaugural Good Deeds Cup in 2016-17 was awarded to The Glace Bay Miners in recognition of the Nova Scotia Pee Wees who celebrated Valentine's Day with Veterans in the community.

Those stories can be explored here.

The Good Deeds Cup has seen some pretty impressive involvement by minor hockey players around Canadian communities that may not have won the title; but certainly made a contribution to their hometowns during the year.

A preview of the opening of the submission for period for teams to participate was part of this weekend's Hockey Night in Canada broadcast.

The submission period for Pee Wee teams across Canada opens on November 2nd, you can learn more about the program here.

For notes on Minor Hockey in the Northwest see our archive page here.

To return to the most recent blog posting of the day, click here.
Posted by . at 9:11 AM