The Government celebrated its tabling on Thursday of proposed legislation to adopt the UN Declaration on the Rights of Indigenous Peoples, introducing the legislative process ahead and setting the stage for debate and discussion in the weeks ahead.

Premier Horgan provided for the preamble to the Government's plan Thursday afternoon, making note of the historical opportunity that the Bill will offer the province. 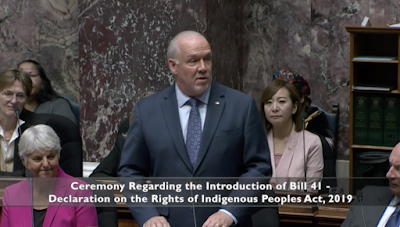 As part of what the NDP government notes is a new path forward, the government outlined how the new legislation will put B.C. laws in line with the UN Declaration on the Rights of Indigenous Peoples.

"This is a historic moment for everyone in B.C. B.C.’s new law recognizes and respects the human rights of Indigenous peoples and will help to build a stronger B.C. It makes sure Indigenous peoples are a part of the decisions that affect them, their families and their territories. It provides a way forward on reconciliation with a plan that will work for everyone in B.C."

The first indications that British Columbia was moving towards adopting the declaration came in the previous sessions of the Legislature earlier this year and late in 2018, which made for some vigorous debate at the time.

In particular, North Coast MLA Jennifer Rice and Skeena MLA Ellis Ross have frequently exchanged differing views on the nature of the UNDRIP declaration and how it may impact on a range of issues in the province.

Mr. Ross and now former MP Nathan Cullen also found themselves having differing views on the nature of the process last year.

As they introduce their plans, the Horgan government will need to provide for more details on how their initiative will work, expanding on many of the themes that have been introduced as part of the larger process, so as to provide for a clearer picture as to how their proposed legislation is to move forward.

Some of the topics that we will be hearing more about in the coming weeks include:

A requirement to develop an action plan to meet the objectives of the UN Declaration, in collaboration with Indigenous peoples

Discretion for new decision-making agreements between the Province and Indigenous governments where decisions directly affect Indigenous peoples and mechanisms exist in applicable legislation – with clear processes, administrative fairness and transparency

Recognition for additional forms of Indigenous governments in agreement-making, such as multiple Nations working together as a collective, or hereditary governments – as determined and recognized by the citizens of the Nation.

One area that is of some interest to many, is the concept of  free, prior and informed consent, an element that was noted as part of the information release of Thursday, and a topic that will require more details as to how what impact if any, that it may have on the development of resources across the province. 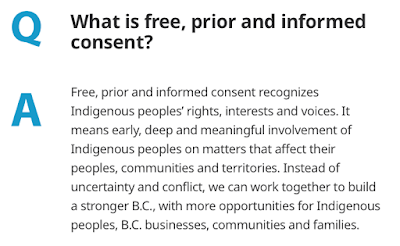 If they are successful in steering the legislation through the chamber, British Columbia will become the first province in Canada to implement the declaration.

The UNDRIP process was passed by the House of Commons back in June of 2018, with MP's at the time voting in favour of the initiative first introduced in 2016 by MP Romeo Saganash.

However, the federal bill stalled in the Senate amidst a fair amount of acrimony.

Prior to the recent election campaign, the Prime Minister had vowed to bring the Bill back to Parliament should the Liberals be re-elected.

The fate of the Federal bill was one theme explored by North Coast MLA Jennifer Rice on Thursday as she shared some of her thoughts on the NDP's own initiative.


The introduction of the Legislation is just one element of the NDP government's forward momentum towards its reconciliation goals, with a recent announcement of the sharing of revenues from the British Columbia Lottery Corporation one of a number initiatives in motion..

You can view the Introduction of the Legislation from the BC Legislature Video feed from Thursday morning starting at the 10:00 AM mark.

For more notes on Thursday's introduction of the legislation see this background piece from the Provincial government.

A look at some of the provincial news coverage of the Thursday announcement can be found from our political blog D'arcy McGee.

More items of note on the work of the Legislature can be found from our archive page.