The City of Prince Rupert passed on the best wishes of the community this week for long serving employees. With the City making note of the twenty five employees of varying terms of service that were to be saluted as part of the Civic Recognition Ceremony.

Sixteen of the twenty five that were up for recognition this year were in attendance for the City hosted Ceremony, with the top spot for this years review featuring the most senior of Civic employees.

That as Linda Robinson celebrated her 35 years of service with the City of Prince Rupert.

Others in attendance with 25 years of service or more with the City included:

Eight other employees were honoured for their five years of service with the City.

You can review the City's pictorial parade of honourees from the City of Prince Rupert Facebook page.

As part of the roll out of information earlier this summer from the City's Annual Report and compensation listings for 2018, it was noted that the City of Prince Rupert employs approximately 259 full and part time employees and staff members. 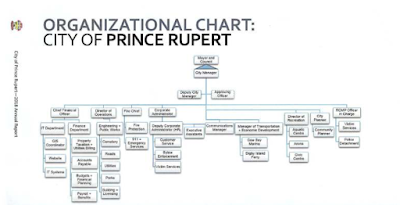 During the council discussion related to the Annual Report, City Council Administration and Council members made a number of observations as to how the culture of the work place at City Hall and other departments had seen a marked improvement over the last five years.

For more items of interest related to Labour and employment notes with the City of Prince Rupert see our archive page here.
Posted by . at 9:13 AM