A New window design marks the progress for Clarity Cannabis, with what appears to be the first of the proposed Cannabis retail operations for city seemingly getting closer to an Opening Day.

A glance through the smoky grey front windows of the Third Avenue West location, offers a glimpse of renovation workers putting the finishing touches on the display cases and counters from the storefront that most recently housed a jewellery store and has been undergoing significant upgrades since work began in July of this year.

While the finishing touches are being made inside the shop, Clarity is currently seeking staff for their Prince Rupert location with a number of job opportunities recently listed on the company website. 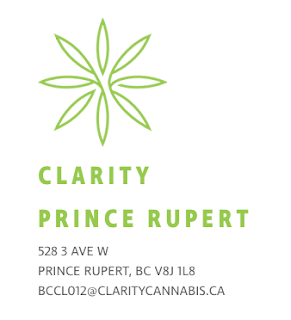 So far there is no indication as to when the new location will open its doors, though it would appear that the much anticipated launch of Prince Rupert's Cannabis retail industry is not that far off it the distance.

That being said however,  as many could attest to on any given day around the city, that lack of a local retail option has not so far slowed down the embrace of residents for the relaxed regulations on the use of cannabis. With cannabis consumers finding their product from any number of sources we imagine.

While Prince Rupert residents await the word of the Grand Opening, many perhaps have been making the trip to Terrace which has seen some forward momentum from the retail sector over the last few months.

The process of bringing the retail shops to the city has been somewhat of a long and winding road so far; with a number of past proposals falling by the wayside along the way and few notes of updates from the others that still remain interested in moving their applications forward.

In June City Council heard an update on the status of some of those applications and the city's plans moving forward on the theme of cultivating a cannabis retail sector.

You can follow the trail to this point from our archive page here.