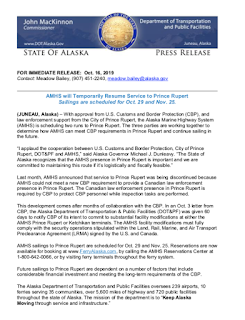 Yesterday's surprise addition of two sailings for the MV Malaspina between Prince Rupert and Ketchikan in October and November has been followed up with a bit of an explanation from the State of Alaska; but one which still leaves out a fair bit of the fine print on the issue of the ongoing nature of the discussions to try to resume service on a permanent basis..

In the statement released today, Alaska Governor Micheal J. Dunleavy applauded the work of those involved so far, offering a commitment to maintaining the route if proven logistically and fiscally feasible.

“I applaud the cooperation between U.S. Customs and Border Protection, City of Prince Rupert, DOT&PF and AMHS. The State of Alaska recognizes that the AMHS presence in Prince Rupert is important and we are committed to maintaining this route if it’s logistically and fiscally feasible.”

The reversal of the cancelled service, if even for the two sailings, comes after months of collaboration with the Customs and Border Protection Service.

Today's update from the State of Alaska points towards an October 3rd letter from CBP, where the Alaska Department of Transportation & Public Facilities (DOT&PF) was given 60 days to notify CBP of its intent to commit to substantial facility modifications at either the AMHS Prince Rupert or Ketchikan terminals.

The statement from today notes that the AMHS facility modifications must fully comply with the security operations stipulated within the Land, Rail, Marine, and Air Transport Preclearance Agreement (LRMA) signed by the U.S. and Canada.

As for the plan beyond the October 29th sailing and that of November 25th, the State of Alaska notes that any Future sailings to Prince Rupert are dependent on a number of factors that include considerable financial investment and meeting the long-term requirements of the CBP.

So far neither the City of Prince Rupert or Mayor Lee Brain through his social media portal, have  provided for any indication as to what the cost may be, or the nature of the involvement that the city will have to take on, as part of any long lasting agreement.

The full statement can be reviewed here.

The AMHS Service was originally cancelled with the September 30th sailing, you can access the new schedule for the remainder of this month and beyond here.

For more items of interest related to the Alaska Marine Highway Service to Prince Rupert see our archive page here.

To return to the most recent blog posting of the day, click here.
Posted by . at 2:33 PM