Should the six weeks of findings from 338 Canada prove correct, the colour of the electoral map for Northwestern British Columbia and Haida Gwaii will remain a bright orange, with the national electoral observer wrapping up their polling process with one final look Sunday at the trends for Skeena-Bulkley Valley.

The 338Canada results were released earlier today and indicate continued growth for the campaign of Taylor Bachrach, who has expanded on his lead of last week.

A bump that has added some breathing space between his campaign and that of Conservative Claire Rattée who continues to hold the second spot as she has for all the 40 days of the campaign, but one which will need to find some late momentum it would seem to catch the NDP candidate.. 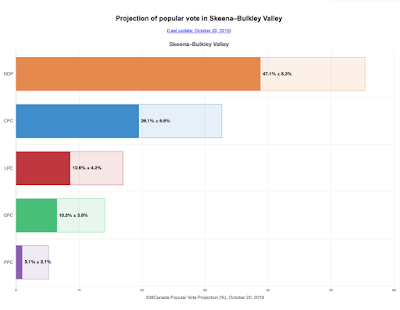 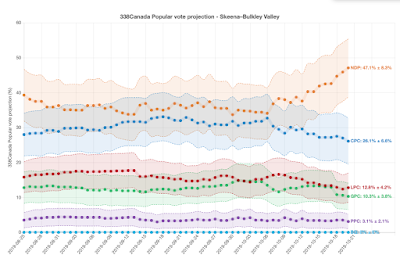 The 338Canada review provided little comfort for Liberal Dave Birdi, or the Green's Mike Sawyer who have really not moved that voter intention needle very much and who have dropped in standing over the last seven days.

Jody Craven's quest on behalf of the People's Party of Canada has it seems been more of an image raising mission, as opposed to one which will generate into a groundswell of votes tomorrow.

The remaining three candidates have not found too much to celebrate from the six weeks of pulse taking, which largely has left them off the listings when it comes to where the voters may be directing their ballot.

And after a forty day campaign of endless phone calls gauging your voter intention, others cajoling you to vote one way or the other and the weekly updates on how the pollsters think we'll vote, we note the words of former Prime Minister John Diefenbaker.

The legendary PM who once observed on the theme of polls ... "I've always been fond of dogs, and they are the one animal that knows the proper treatment to give poles"

And indeed, any prognostication prior to Election Day is really nothing more than a snap shot of the moment it was taken in and not the final decision to be carved in stone.

That decision comes with a 7 AM start tomorrow, or from one of the advance polls of the last week  ...  with your vote with a piece of paper and an X in truth, the only poll that matters.


The key for all the candidates who have put forward their names and given of their time as part of our democratic ways, comes by way of getting the vote out tomorrow; with hopes for as large a turn out as can be delivered after the string of forums, coffee sessions, pub appearances and door knocking of the last six weeks.

In Prince Rupert, the exercise of your democratic right to freely choose the government will take place at the Jim Ciccone Civic Centre, a twelve hour window to take five to ten minutes out of your day to ensure that electoral democracy continues to fly a flag proudly in Canada.

In many other nations around our troubled world, people don't have that choice, many yearning for a day when they will have the freedom to say who should govern them.

Don't take your right to vote for granted, cast a ballot, maybe bring a friend or two to do the same to ensure that as many eligible voters as possible participate in a time tested process of democracy.

Whatever one's political persuasion may be, make the most of a democratic principle that we should never take for granted.

The voting booth is open from 7 AM to 7 PM, bring your voter card and Identification with you if you received one, register to vote at the civic centre if you have not yet registered, learn more about the process from the Elections Canada website.

You can review the forty days to election day from our archive page here, for a wider overview of the National campaign see our Political Blog D'Arcy McGee.