For Northwest Craft Brewers there's still the Write in Vote 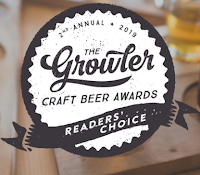 While Canadian from Coast to Coast to Coast will exercise their democratic rights on the 21st, British Columbians have been hopping to the online voting booth for another exercise in democracy, It's voting in a range of categories in the 2nd Annual Growler's Readers Choice Awards.

The online voting has been going on for much of the month, after a panel of Craft Beer experts narrowed down the voting list to a field of ten in each category, with the voting to continue until October 25th.

And while the growing list of Craft Brewers of the Northwest didn't make the cut in the list of categories available, each category has an Others section for voters to highlight what the panel may have missed.

And there are also a number of Open Categories where fans of the Wheelhouse in Prince Rupert, or the other fine establishments of the region can try to get the Northwest some love.

You can review the categories and cast a ballot if you wish here.

The Results will be tabulated and winners announced as part of the December 1st edition of the Growler.

The Growlers come along as just one of a number of events celebrating BC Craft Beer Month.

A much more formal, industry driven competition  comes to an end this Saturday night at the Croatian Culture Centre in Vancouver when the annual BC Craft Beer Awards are handed out.

That competition features over 30 beer categories as well as a number of other Awards to be handed out to the expanding list of brewers in communities across the province.

You can keep up with the ever changing Northwest Craft Beer industry from our Commercial Sector Archive.

To return to the most recent blog posting of the day, click here.
Posted by . at 10:57 AM

Email ThisBlogThis!Share to TwitterShare to FacebookShare to Pinterest
Labels: October is Craft Beer month in BC