Prince Rupert Mayor Lee Brain has offered his congratulations to the new MP for Skeena-Bulkley Valley, with the Mayor having taken to his Social Media page on Monday evening.

That following the declaration of Taylor Bachrach as the successful candidate from 2019 Federal vote.

In his short message to the new MP, Mr. Brain outlined how he looks forward to continuing to work with him for the benefit of the community and the region. Observing how he has no doubt that the MP will be a tireless advocate for everyone in the riding.

The Mayor has had  a long and collegial relationship with Mr. Bachrach who served as Mayor of Smithers and will soon relinquish that position as he moves to the Federal scene.

Mr. Brain was also one of the first in the region to throw his support behind Bachrach's campaign when the Smithers Mayor announced back in May.

The two were very close in their thinking on issues of the environment and sustainability initiatives, with Mr. Brain serving with Mr. Bachrach on the BC Mayors Climate Control Council and attending other climate themed events with the Smithers Mayor.

As part of his election night shout out, the Mayor also paid tribute to the remaining candidates from the campaign offering his congratulations towards their commitment to the electoral process and for offering their ideas to the region over the last few months. 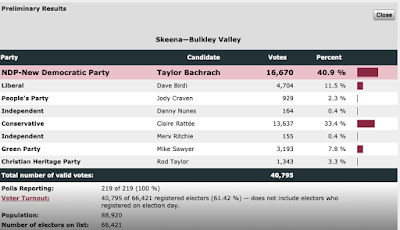 For his part, the next MP for Skeena-Bulkley Valley posted some of his post election thoughts and thanks through his Facebook portal on Tuesday afternoon. 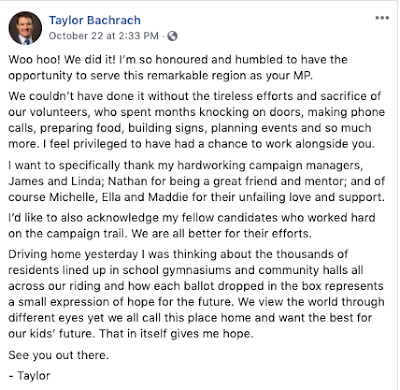 For a look back at the pace of the 2019 campaign see our archive page here.