Has Prince Rupert picked up the security tab for two AMHS sailings of October and November?


Earlier this week, Mayor Lee Brain took to his Facebook page to share word of "great news" on transportation and cross border ties.

Announcing the return of service, even if as a temporary move, that will provide for two sailings, of the Alaska Marine Highway System, with one transit to and from Ketchikan in October and the other in November.

Though at the time, Mr. Brain was somewhat light on a full overview from his Social media post, simply noting that more information would be released when available. 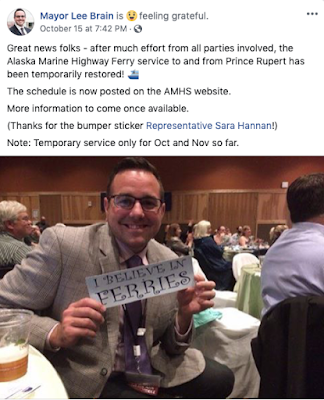 Interestingly enough, all of those details so far have come from the State of Alaska, which as we noted yesterday, announced the resumption of the service for the two sailings.

At the same time, Alaska officials were also suggesting that future sailings would be determined by whether the security issues that led to the suspension were resolved and whether the service is logistically and fiscally feasible moving forward.

As word spread up and down the Alaska coast yesterday, media reports provided for some further notes on the return to Prince Rupert for the Malaspina.

With one report, that from the Juneau Empire noting that one element of the return of the service is thanks to the City of Prince Rupert paying for RCMP officers to be present at the AMHS terminal for the two trips.

"According to DOT&PF Communications Director Meadow Bailey, the city of Prince Rupert will pay for its officers to be present for the two scheduled trips, but beyond that is yet to be determined."-- From the Juneau Empire

It seems somewhat strange that if the City has indeed offered to pay for those officers, that the Mayor would not remember that as part of his celebratory post of Tuesday evening.

And so far, the City still hasn't expanded much beyond that Facebook post towards the theme of the resumption of service and what the city's involvement in that reversal by the State of Alaska may have been.

So perhaps it may be time for a more helpful update from Mayor Brain, whether through the City's communication officer, or by way of his personal Facebook page where most of his projects get their first run through.

Regardless of which method he chooses, the city's residents and taxpayers should at least be informed of the back story to the good news of a return for the Alaska Ferry.

As well, it's probably time for the Mayor and Council to share how much it is going to cost to bring the service back for the two occasions and more importantly; what the Mayor's Long term plan includes when it comes to helping to make the AMHS service "fiscally feasible" and how much that goal may cost the City?

For more items of note related to the AMHS service on the North Coast see our archive page.

To return to the most recent blog posting of the day, click here.
Posted by . at 12:15 AM