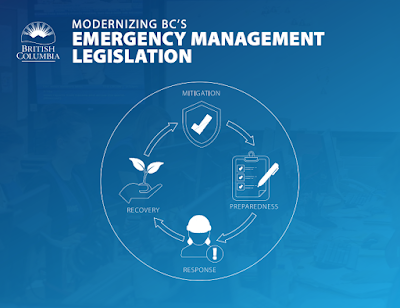 The Province of British Columbia has set out on a path towards revision of its Emergency Program Act, a document which hasn't seen much change since its introduction in 1993, despite some significant changes to the nature of some of the emergencies that the province can face in any given year.

Mike Farnworth, the Minister of Public Safety and Solicitor General for British Columbia carried forward the bulk of the introduction of the plans on Monday. With the Minister outlining what the focus for the province would be as it takes to the work ahead.

“There’s a lot of emergency management expertise and experience in this province that can help us ensure that modernized legislation is responsive to B.C.’s needs in the future. Whether it’s a wildfire or a flood, the legislative framework provides the backbone of what we do. We want to draw upon the knowledge that exists so our legislation reflects what communities need to prepare for, respond to and recover from emergencies.”

To get the engagement with the public underway, the province released a discussion paper on Monday seeking comment from the public. Among some of the themes that the document explores and is seeking feedback on are proposed changes that would:

Reflect a shift from disaster response to managing and reducing disaster risk;

Include an all-of-society approach where emergency management is a shared responsibility of individuals, governments, communities and private and non-profit sectors;

Put safety first, with the protection of life, health and safety being paramount;

Make sure decisions made under the act and its regulations are transparent;

Include a funding mechanism that is responsive, flexible and disciplined; and

Ensure the act is inclusive and considers the needs of vulnerable citizens.

You can review the discussion document here.

Learn more about how to contribute to the discussion here.

As they look towards modernization of the Act, the Provincial government will also make us of it as a way to further reconciliation with First Nations in BC, something noted by Chief Don Tom, the Vice President of the Union of B.C. Indian Chiefs on Monday.

“First Nations have been severely affected by floods, wildfires and other emergency events, and it’s absolutely critical that Indigenous rights and community-based needs are reflected in the legislation that guides the response and recovery from those events. We have high expectations that the needs of First Nations will be properly reflected in the emergency management legislation, to ensure the safety of our communities.”

The introduction to the discussion paper includes a message from Minister Farworth which provides further detail to the citizen engagement process. 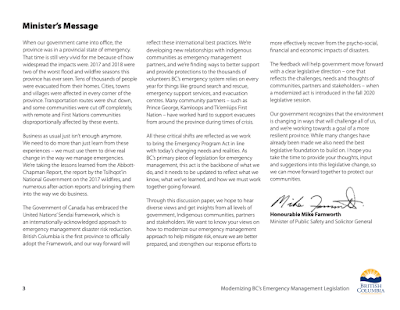 The case for the modernization is being made through adoption of what is called the Sendai Framework for Disaster Risk Reduction part of a United Nations initiative that has been adopted by 187 countries including Canada. 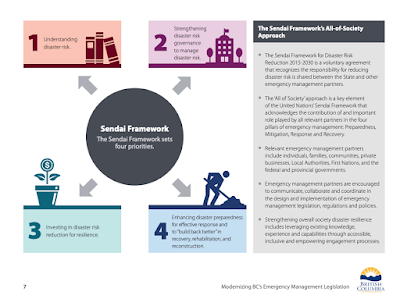 As part of her contribution to the roll out of the new initiative, North Coast MLA Jennifer Rice, who is the Parliamentary Secretary for Emergency preparedness outlined some of her past travels around the province and how the modernization program will call on those events to create a more comprehensive approach to the Act.

“Over the past few years, I’ve visited communities all over the province and met with people dealing with devastating events or preparing for that possibility. It’s important that we continue to work together to learn from prior emergency events and incorporate those lessons to make all British Columbians more resilient in the face of disaster.”

The feedback from the Discussion paper will be accepted by the province until January 31st of 2020.

More notes on the British Columbia Legislature can be found from our archive page here.
Posted by . at 9:19 AM