Prince Rupert Council received an update on a range of themes coming out of the Prince Rupert SPCA Shelter on Prince Rupert Boulevard on Monday evening, with Joe Griffith providing an overview of recent issues in the community, as well as potential solutions to help address some of the larger areas of concern locally.

The first part of the presentation provided for a statistical review, which noted that the Shelter has taken in 256 intakes, with  153 of those strays within the community the SPCA has also provided spay and neuter service on 104 animals.

The local adoption level so far is 93 taken in by local residents as domestic pets, Mr. Griffith's also observed how the Prince Rupert shelter is primarily a transfer shelter with 154 transfers out of the community to date. 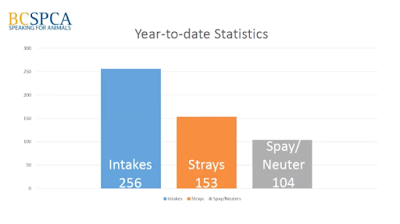 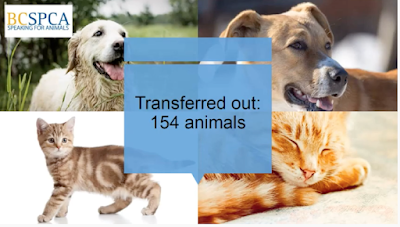 Mr. Griffith also outlined how the one vet in the community had moved on from his practice as of September 30th, which means the city is now served through the use  of locums who come to the community on a rotating schedule.

One potential solution that was offered up to City Council is the SPCA mobile unit which is currently based in Smithers and could be brought to the community to help alleviate some of the pressures in the city when it comes to spaying and neutering program.

Something which he noted might be of great assistance when it comes to an explosion of wild or feral cats in the community at the moment.

When it comes to challenges that the shelter faces, the need more volunteers is at the top of the list, it was noted on Monday that the Prince Rupert Boulevard location is one that is not accessible by public transit, with Mr. Griffith observing that if they see a change in the routing locally, then that access they may see an increase of volunteer workers.

When it came to questions on the night, Councillor Adey inquired as to how long the SPCA hold animals in foster care and what process they have in place on how to deal with them.

He was advised that part of the issue is the need to spay and neuter them and to ensure that they are in good health before they can be released for adoption. When it comes to deciding which animals are adopted in town and which ones are moved to other communities, the SPCA has a coordinator that works towards the placement depending on the demand locally.

Councillor Niesh asked for more details on the mobile unit program asking towards cost and time frame for visits.  He was advised that  the cost towards bringing the mobile unit would be at 20,000 dollars based on two sessions of three visits over six days. Which works out to around $165 per animal for a spay and neuter program.

As for arranging for the program Mr. Griffith observed that it would be a low cost solution, though he noted how it would need to be advertised and would require a large number of volunteers and some additional space for recovery for the animals.

He also highlighted how it would bring attention towards how the feral cat concerns are a community problem and how eliminating some of the reasons behind it would help to bring the community together.

Councillor Cunningham asked what percentage that the feral cats make for in the community and how the program may work towards that issue, Mr. Griffith noted how he didn't have those figures handy.

As for treating the feral cat concerns in the community, the SPCA's first preferred approach would be to offer the spay and neuter program to those in lower income categories in the area who many not currently be able to afford it.

Mr. Griffith further noted how the process of capturing the feral cats one that would be quite challenging for the local branch at the moment.

You can review the full presentation to Council from the City's Video archive starting at the beginning of the council session.

For more background on the work of the BC SPCA in Prince Rupert see the SPCA website or their local Facebook page.

Further notes from Monday's Council session can be explored from our Council Timeline, while a wider overview of Council Discussion themes is available from our archive page.

Email ThisBlogThis!Share to TwitterShare to FacebookShare to Pinterest
Labels: SPCA Presentation to Council