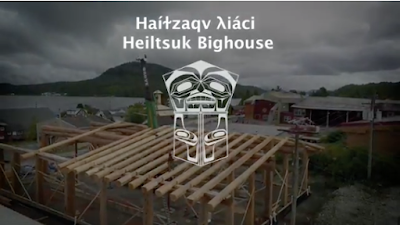 With one week of celebrations now part of another chapter of the storied of the Heiltsuk people, North Coast MLA Jennifer Rice provided members of the British Columbia Legislature with a snap shot of the Opening of the new Heiltsuk Big House.

Sharing her thoughts and impressions of theimpressive and significant structure recently completed by the Heiltsuk First Nation at Bella Bella.

As part of her narrative, Ms. Rice relayed for the Legislature, the history of the original structure was one which was destroyed 120 years ago, considered to be part of a goal to assimilate the First Nations of the coastal region; said by missionaries of the time to have succumbed to a storm, that is an account that few have come to accept over the years.

From the historical to the present, the MLA observed of the work that went into the year and half construction project which made use exclusively of red and yellow cedar from the Heiltsuk territory.

With the work completed, the community came together with a range of invited guests from near and far to officially open the doors the Big House, a celebration that included dancing, feasts and many speeches to hail the accomplishment.

The community spent this past week with guests from all over B.C. and as far away as New Zealand. The opening means the community now has an appropriate space for carrying out their governance systems and for their ceremonial events like potlatches and the naming of babies, which had previously been carried out in a community centre.

Indigenous artists worked tirelessly to design, carve and paint four house posts that tell the origin story of Heiltsuk people. They are stunning and magnificent.

As a concluding theme to her remarks for the Legislature, the MLA observed on the comments of Heiltsuk Chief Marilyn Slett who hailed the powerful symbol for the Nation that the Big House represents.

"Going forward, it's a symbol of our strength and our resilience as people."

Ms. Rice's presentation to the Legislature can be reviewed below:

A Heiltsuk twitter feed provides a glimpse of the project through the course of the last eighteen months as the Big House moved from planning to completion.


As well the following YouTube features provides more views of the path towards the completion of the Big House.


The range of notes below, provide for a larger understanding of the importance of the construction of he Big House and the celebrations of the last week for the Heiltsuk First Nation

For more items of interest related to the Central Coast and the Heiltsuk see our archive page here.
Posted by . at 12:54 PM