Travellers into the Stewart to Atlin corridor and beyond will be making use of the latest in infrastructure now, as the Ministry of Transportation celebrates the opening of the Nass River Bridge, the two lane span which now replaces the previous single lane bridge that was built in 1972.

Doug Donaldson, the Minister of Forests, Lands, Natural Resources and Rural Development was pinch hitting for Transportation Minister Claire Trevena, as he celebrated the opening for the long anticipated improvement to the regional infrastructure.

“The new Nass River Bridge will better connect B.C.’s northern resource communities to the rest of the province. Forestry, mining and tourism are all important to the Northwest, and this two-lane upgrade to the Nass River crossing will support trade and economic growth in the region for years to come. It’s also a safer, modern piece of infrastructure that local and regional residents deserve.”

As well as the new bridge, the immediate area has seen a realignment of one kilometre of Highway 37 North and will now allow for a consistent 90 km/h speed limit, there is also an improved rest stop area and a new lookout for viewing the Nass River Canyon.

The total value for the project was 30.5 million dollars, with the Federal government providing for 10.6 million through the Building Canada Fund, the Province picked up the rest of the tab on the new bridge.

Details on the Nass River Bridge project can be explored here.

The now completed Nass River project is among a few ongoing transportation projects now at different levels of the to do list for the inland area of the Northwest this year.

At the junction of Highways 16 & 37, the new Roundabout project is moving along nicely, with work to replace the current four way stop moving past the midway point, with completion expected before the winter arrives.

With the highway improvement for the Terrace/Thornhill area almost complete, the next big project will be the construction of a new 15 million dollar plus weigh scale station along the Thornhill frontage road. That project is still in the planning stage, with no firm date outlined yet as to when it will get underway.

When it comes to highway project west of Terrace, one significant piece of highway infrastructure remains in a suspended state, that after the Province put a hold on plans to remove the highway rail crossing at Mile 28 of Highway 16 between Terrace and Prince Rupert.

The Mile 28 project was supposed to get underway this past summer, put in May it was put on the back burner, that as the Province became a little shy towards its construction as cost estimates continued to rise.

So far there has been no further word from the Ministry as to what its future may be.

One project that did reach the finish line in Prince Rupert was the McBride Street/Second Avenue West traffic signal and crosswalk work, which was officially declared completed earlier this fall. 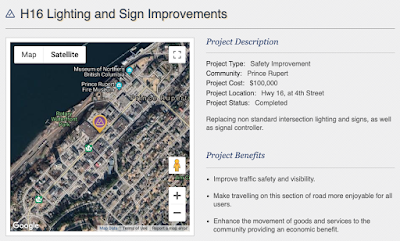 That work which was announced in September of 2018, had originally included some early plans to explore the creation of a Roundabout at the corner of McBride and and Second Avenue West at the Court House.

However, so far there has been no further indication as to the status of that study or what the plans moving forward may be.

For more items of note related to Transportation initiatives in the Northwest see our archive page here.

Email ThisBlogThis!Share to TwitterShare to FacebookShare to Pinterest
Labels: Highway infrastructure work in NW BC