The City of Prince Rupert is looking to re-brand itself, with a Request for Bids issued last week to solicit cost estimates for consulting services to develop a brand identity, which will include development of a new logo and visual identity guide for the community.

The bid was posted late Friday to the provincial Bid BC site, with Communications Manager, Veronika Stewart listed as the person on point for the new image initiative for the City.

As part of the documentation that accompanies the terms for the bid process, the City outlines the reasoning behind the desire for the brand new look with the following:

Prince Rupert currently uses our outdated City crest logo and crest and associated tag line are difficult to translate across all types of communications documents, and do not reflect our modern community.

The City has identified attraction and retention of population as a strategic priority, which requires a new brand that will support marketing initiatives and community outreach.

Towards the work of the re-branding proposal, the successful image making applicants will be asked to develop the following elements towards a new look.

Creation of a new logo that represents Prince Rupert

Identify a brand identity and handbook, along with branded colour palette to complement the new logo

The deadline for applicants to submit their bids is November 15th. 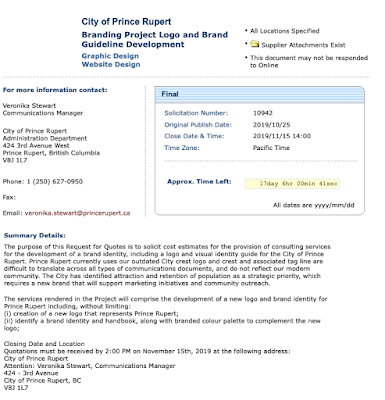 The timeline moving forward on the project is fairly ambitious as well.

Expectations must be that an out of town applicant will have the most success in the bid process, with one of the elements noting:

All pointing to a one year period from start to finish, included on the road to roll out will be:

A contract signing planned for January 8th of next year.

Expectations must be that an out of town applicant will have the most success in the bid process, with one of the elements noting a call for a :

First visit to gain knowledge of the community set for mid February.

With integration of the stakeholder feedback to be realized by the middle of June 2020.

Followed by the delivery of the New Community logo  and other elements to be provided to the City by December 15th of 2020.

So far, the re-branding initiative has not made for much in the way of conversation in the public sessions of Prince Rupert City Council, a place where there has so far been little to no indication that the existing logo and current civic marketing focus has outlived its time.

With the Request for Bids now underway, it would seem however that the City Council Members and Mayor Brain have decided that the Old must GO and that the new era of Hays 2.0, redesign Rupert and such ventures will need a splashy new visual presentation.

The decision perhaps one that has been determined through the growing number of workshops and closed sessions which chart much of the course of City Council these days.

Though, one might think that something such as a re-branding program is a topic for conversation that could have helped fill in some of those past Council sessions; particularly the one's where the city's elected officials couldn't find much to talk about.

As they look to move the plan forward, hopefully someone on Council may ask a few questions on behalf of the public in one of the upcoming public Council sessions.

Seeking some background for the public on such troublesome details as cost for the study to be launched, what the budget for the new initiative may be, as well as from where that funding will come from.

As well, some of them may want to go on the record as to whether we really need the image makeover at this time, or if perhaps, the city's finances might be best used on other more pressing items on the to do list.

So far the city's plans to ring out the old and bring in the new look have not made it to the many social media portals that they make use of towards messaging making these days.

Flying as it is a tad under the radar for the moment it would seem.

The City's rebranding plans, come following a similar project launched by North Coast Regional District which rolled out their new look in January of 2018.

The City itself has had some practice at the re-branding concept, having revealed a new look for the Watson Intermodal Trade and Logistics Park. 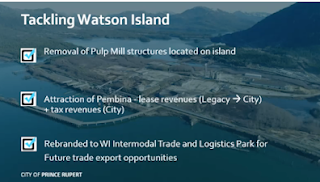 The City was also involved with the relaunch and refocus for redesign rupert last year. 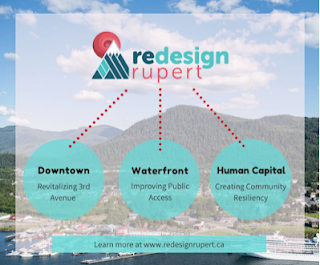 The full documentation for the City of Prince Rupert's Request for Bids is available on the BC Bid website.

For a look at some of the previous Requests for Bids see our archive page here.

A wider overview of City Council Discussion themes of the past can be reviewed from our archive page.

Email ThisBlogThis!Share to TwitterShare to FacebookShare to Pinterest
Labels: City to seek Bids for new branding including corporate logo