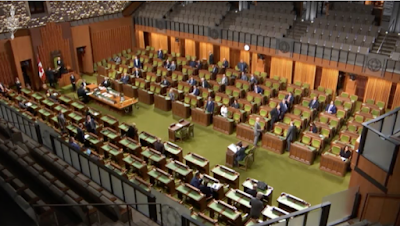 Just one week after his success at the polls, the newly elected MP for Skeena-Bulkley Valley is in Ottawa receiving the first of a couple of tutorials on what's to come with his new job and the experiences ahead as Member of Parliament.

Taylor Bachrach, made note of his departure earlier this week, offering a short social media message as he took to his bike for a road trip (though he did note that the majority of the trip might not involve the two wheeled form of transit).

The MP may want to find some storage space for the bike for the next few months, while Smithers is used to winter ... the seasonal conditions in Ottawa from December to March aren't always the most hospitable towards travelling the bike paths in a comfortable fashion. 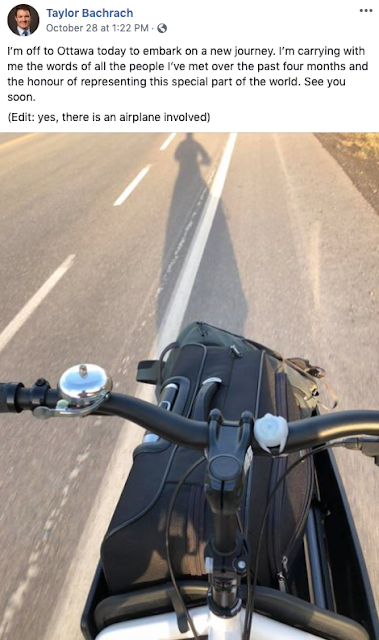 Once in the nation's capital Mr. Bachrach joined the incoming class of 2019, as the rookie MP's learned the ways of office staffing, budget making and other notes on the day to day operations of their Ottawa offices.

Still to come a second wave of information a little closer to the resumption of Parliament, at those sessions the new MP's will received more background on how the process of debate and discussion works in the House of Commons.

Mr. Bachrach is one of ninety eight newly elected MP's making their debut in the House of Commons, the newly elected government of Liberal Justin Trudeau is expected to announce his new cabinet in mid-November.

Once the cabinet is in place, MP's will have a better sense of when Parliament will return and they can make their debut in the House of Commons.

For more notes on the work of MP's in the Nations capital see our House of Commons archive page here.
Posted by . at 10:17 AM

Email ThisBlogThis!Share to TwitterShare to FacebookShare to Pinterest
Labels: Taylor Bachrach in Ottawa for MP training