Should you drop into the Lester Centre over the course of a twenty five hour period from November 1st to 2nd, there's a good chance you'll be hearing voices ... that as the Charles Hays Debate Club hosts a Speakathon to help raise funds towards competition at provincial events.

The format planned for the 25-Hour Speakathon  is to present one hundred speeches, of 15-minute duration each to the public, with Club members seeking pledges for each of the slots that are available for the ambitious schedule.

The Speakathon which will be open to the public, will take place in the lobby of the Lester Centre of the Arts and will feature two phases over the two days. 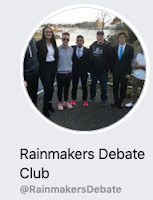 The  first segment to run from 4 PM to midnight on Friday November 1st, with segment number two set for the next day from 7 AM to Midnight on Saturday, November 2nd.

As part of the event, a number of prominent local leaders are being recruited to deliver speeches, with names listed on  the Clubs  Facebook page as slots are pledged and scheduled.

Members of the public may nominate other speakers for a suggested donation of $20 or more.

Nominated speakers will be visited in-person by club members to confirm their availability and assign them to a speaking slot and an opportunity to contribute to civilized debate in Prince Rupert.

To give you an idea as to how you can submit your nomination for the 25 hour event, we'll turn turn it over to the Debate Club for further background.

The Club has already taken part in their first road trip of the year, a September journey to the University of Victoria and a chance to take part in some provincial competition.

An event marked by this contribution from Charles Hays Debate Club member Brendan Eshom, who also outlines what the Club hopes to achieve through their November event.

"We were excited to have three teams representing Prince Rupert at the recent University of Victoria competition. Since early spring and through the summer, club members have been training to clash with debaters from other parts of BC. The 24-Hour Speakathon is a way to raise funds while sharing our passion for ideas and public speaking with our community." 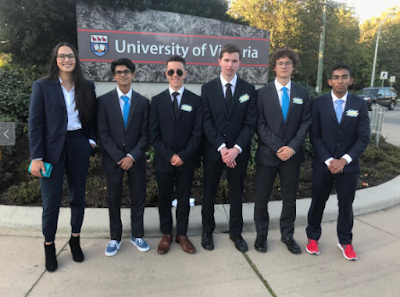 Still to come for the Club are some more opportunities for debate in the weeks ahead.

They are scheduled to participate in the UBC High School tournament on November 22 and 23.

The Regional Qualifiers for the provincial tournament takes place on Jan 31-Feb 1 and at the moment is tentatively planned for Prince George.

There also plans to participate in the provincial Law Foundation Cup competition happens on Feb 28-29 in the Lower Mainland.

Find out more about the Speakathon of November, plans to stream the event live as well as notes from the Club from their Facebook page here.

To view the most recent blog posting of the day, click here.
Posted by . at 2:47 PM