If there is one business in town that is having a strong summer, it's the renovation business, with a number of commercial locations in the city recently taking on a new look as new business offerings open their doors in the city.

In recent days, we've taken note of work at Le's Lovely Nails and Hair Spa, along with out notes yesterday on the work done on the new Gitga'at Business Spotless Cleaners.

Just up the block on Third, work is now underway on the old Manson's/Carters Jewellers location as renovation crews begin to gut the building in anticipation of its next step on the Business stage.

The location has recently been in the spotlight as the chosen spot for Clarity Cannabis, one of a number of proposed cannabis retailers looking to set up in the City of Prince Rupert.

When last heard of the progress for the Clarity application back in March, it had been forwarded to the province , to await final determination, one of two privately held cannabis locations to now await the final go ahead from the province.

One other, a BC Cannabis proposal is a government run store and is also in the list of locations awaiting the final nod from the provincial regulators.

So far Clarity Cannabis, has opened five locations in Alberta and British Columbia, though at the moment they don't have the Prince Rupert plans listed as part of their opening soon notes. 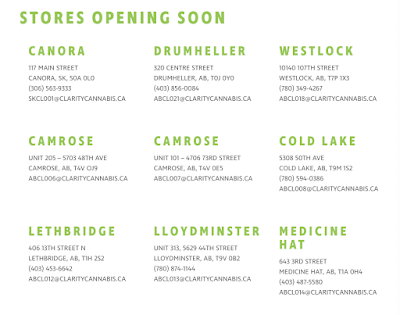 For those looking through the cannabis leaves for signs ... the future it seems is providing for some positive momentum, that if the sudden push towards renovations on the Third Avenue storefront are any indication

For a look at the path towards retail Cannabis in Prince Rupert see our archive page here.

To return to the most recent blog posting of the day, click here.
Posted by . at 10:56 AM