North Coast MLA Jennifer Rice hailed some recently proposed changes to the sharing of Gambling revenues with First Nations on Wednesday, speaking to the initiative known as the the Gaming Control Amendment Act in the Legislature in the waning moments of the Wednesday session.

As she outlined for the chamber, the money that will be transferred to First Nations is to be used in six areas that support governance in the communities that will receive the funds, framing the plan as part of the government's commitment to reconciliation.

Those areas include  such elements as health and wellness; infrastructure, safety, transportation and housing; economic and business development; education, language, culture and training; community development and environmental protection; and capacity building, fiscal management and governance.

The move by the Province which was announced on Tuesday by will see the government direct 7% of BC Lottery Corporation net income to the communities for the next 23 years.

In anticipation of the program, the government has already shared over 194 million dollars with First Nations through an interim agreement covering the first two years of the 25 year commitment.

She noted that the move will not impact on what local municipalities may receive from those gaming centres that they host, nor will it affect what community groups may receive. 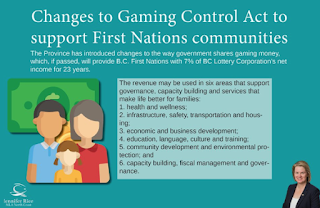 In her comments to the Legislature, Ms. Rice also challenged some of the comments from Skeena MLA Ellis Ross who earlier in the session had questioned how the bill had been crafted and the process that brought it to the Legislature

In terms of this, it's not the first time a revenue-sharing agreement has been brought to the First Nations of B.C. from the provincial government. But there was a comment made earlier that said that this is in partnership with 203 bands. I find this remarkable. This is an incredible achievement when you are talking about 203 bands in B.C., and my only question around that is: how did you achieve this? How did you consult with 203 bands?

To me, this is not a done deal. We have the announcements, but it's not a final agreement yet. It won't be final in terms of complete participation until we get 203 bands signed on to the limited partnership. That's when we'll see success, because that's what the government announced. But it all goes back to determining success.

If there are some bands that do not want to join a limited partnership or do not want to join an application-driven process, then you can't claim success in terms of a revenue-sharing agreement for those ineligible First Nations. In terms of that, the First Nations that are ineligible will be for two reasons. One is because they don't agree with the structure or the format, and the other one is going to be for lack of capacity.

In reply Ms. Rice offered up a few themes for review for both Mr. Ross and Nechako Lakes MLA John Rustad, who had also spoken to the topic.

Now, the member for Skeena spent quite a bit of time talking about how offended he was at the term "closing the economic gap." I just wanted to point out that these were words that Indigenous people had used themselves to actually describe their current situation. These aren't our words. These aren't the provincial government's words.

Here we are a colonial government, we're making a decision in this Legislature on how we share gaming revenue, which is essentially money earned from the land that we stole from Indigenous people. The fact that we actually have to have this debate is really, really troubling for me. Really troubling for me. It should be a bill that is easy to pass, because it's actually a really, really small step in the face of reconciliation.

First Nations have been advocating for shared gaming revenues for years, and in my opinion, that should be enough to guide the actions of this House. Settlers who created our own colonial systems are not the thought leaders on the way forward to reconciliation. So the member from Nechako Lakes offering that we are paying off our friends or that we're somehow creating dependency — I think that is what's really offensive.

You know, settlers created this system, and reconciliation is about standing with First Nations. It's about standing beside them, taking actions that enable First Nations to reclaim their own agency. That's what matters. And if First Nations have been talking and telling the government the same thing consistently for years, it's a pretty good bet that this is a step in the right direction. And We should all be voting in favour of this bill.

The themes of those discussions can be reviewed from the Hansard review of Wednesday's Legislature session starting at the 3:10 PM mark

The full video of the debate from all participants can be reviewed from the Legislature video.

Ms. Rices' full commentary to the Legislature from Wednesday is available below.

If approved in the Legislature it is expected to deliver roughly 100 million per year to eligible First Nations.

More on the proposed government program can be explored here.

For more  items related to the work at the Legislature see our archive page here.


To return to the most recent blog posting of the day, click here.
Posted by . at 5:34 PM