The President of the Nisga'a Nation has outlined the next step in the Nisga'a Lisims Government's plan to develop an LNG terminal as part of their Ksi Lisims LNG project,  that as Eva Clayton released a message to Nisga'a residents timed to coincide with the project being listed as part of the Regulatory review process. 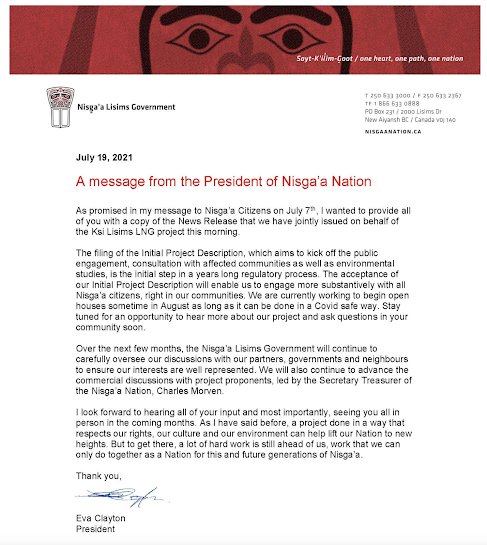 In comments as part of today's announcement, the Nisga'a Nation president noted as to the economic impact the the project would have for the Nisga'a people.

"Attracting a economic base to the Nass Valley has long been a priority for the Nisga'a Nation. That is why, for close to a decade, our Nation has worked to attract a world-leading LNG project to our treaty lands, and why we are proud to commence the formal regulatory process for our project, Ksi Lisims LNG"

The full overview of the project which is a partnership between the Nisga'a Nation, Rockies LNG and Western LNG can be explored further here.

The proposed site for the terminal development is within Nisga'a treaty lands on the northern tip of Pearse Island on the Portland Canal, west of Gingolx.

Once completed Ksi Lisims LNG will be designed to produce up to 12 million tonnes of LNG per year and will receive approximately 1.7 to 2.9 billion cubic feet of natural gas per day. It's anticipated the the timeline of construction will see commercial operations commence in late 2027 or early 2028.

The information release from today notes that the it will reach net zero emission with three years of startup, that through the use of hydro electricity, expanded energy efficiencies, carbon offsets and the potential use of carbon capture and storage options.

You can review the documentation filed with the BC EAO process here. The call for comments and opening of the commentary option has yet to be created on that site.

The Federal Impact Assessment Agency also has yet to create a file for the Ksi proposal.

We will update out notes once those files have been created and the timeline for commentary has been established.

We provided a background piece on the proposed development earlier this month.

More background on the Ksi Nisga'a project can be reviewed from our archive page.