One of the many elements of a new look for the downtown core has been launched, with the City of Prince Rupert issuing a Request for Proposals  last week for what is to be known as the downtown 'Gateway' area, with the corner of McBride Street and Third Avenue West the focus for development.

The revitalization plan is outlined in a presentation on the BC Bid website, which notes how the development of the Gateway project will serve as a catalyst for the City Centre and establish a quality gateway into the City Centre.

The two main properties in the specified area are owned by Northern Savings Credit Union and M and M Ventures Ltd, while the two other elements include  the roadway of Third Avenue West and the lane behind the Credit Union properties.

The information synopsis also notes how the  'client' will actively engage with the Port of Prince Rupert and other potential commercial and institutional occupants of the Gateway project to assist in marketing and disposition of the project. 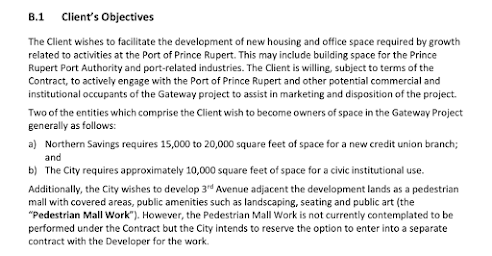 One key element of the prospectus is the city's wish to develop 3rd Avenue adjacent the development lands as a pedestrian mall with covered areas, public amenities such as landscaping, seating and public art, to be known as "Pedestrian Mall Work"

Though it's noted that is not something  that is part of the current contract opportunity but something the city is reserving an option on towards a separate contract.

The Scope of Development for the Gateway Project would seen those with an interest purchase the parcels of land from their respective owners and then develop the concept plan for the new development as well as to post a performance bond with the the City to guarantee performance.

The deadline to submit interest for the RFP is September 1st.

Rob Buchan, from the city's contract planning firm iPlan is the contact point for the RFP; as they are located on Vancouver Island, the address to seek further information is that of an office in Sannichton.

The Schedule towards potential development would see a proponent selected by September 14th, with the preparation and signing of a contract set for September 21st.
The payment by Developer to the owners of the parcels of land would be required by February 28th of 2022, with construction to start by June 2022.
Building and pedestrian mall completion would be expected by June 2023.
The Gateway proposal was one of the many redevelopment themes that were explored as part of the Vision 2030 planning, with its genesis coming well before that December 2019 presentation event at the Lester Centre. 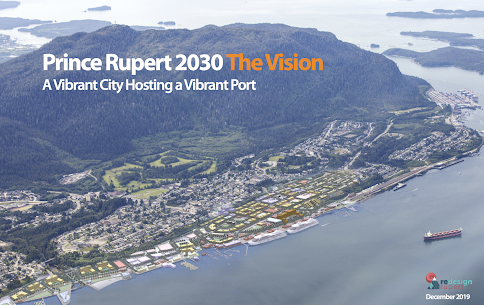 The RFP issued last Friday is the first significant mention of the Gateway since that public event which saw renowned civic planner Larry Beasley outline the vast remaking of the city that could be ahead.
You can review the themes from that vision document from the Redesign Rupert online portal

The Gateway element would serve as the entry point to the city's Upper Town/Downtown District, with the city's new RCMP detachment seemingly set to serve as one corner of the revisioned downtown area once that facility is constructed. 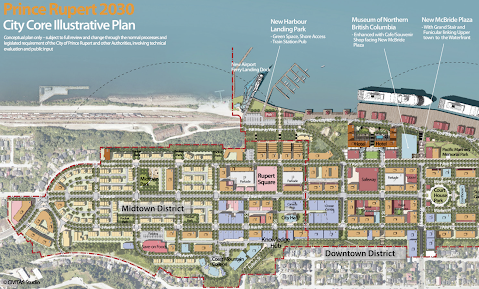 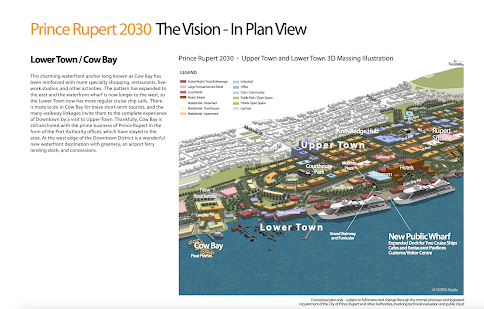 Some of the other elements that were outlined that night in 2019 are currently at different levels of development, ranging from the Seal Cove recreation area nearing completion to the Rueprt's Landing proposal and redevelopment of the old CN/VIA station on the waterfront which are still in the pre planning stages.

You can catch up on some of the work to date on those plans from our project tracker page.

The first opportunity for Mayor and Council to offer up some thoughts on the latest element of the Vision plan comes up next Monday, when they host their only Public Council session for the month as part of their July 26th meeting.

You can review the full package on the Gateway project from the BC Bid website.

More notes on the city's ambitions for redevelopment can be explored from our ReDesign Rupert archive.

Further themes on City Council discussions are available from our archive page here.