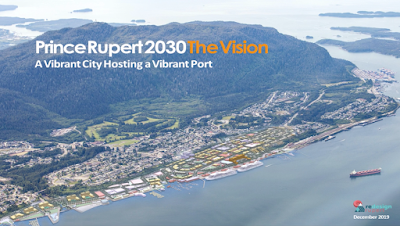 The blue prints were indeed impressive as promised; but whether the house of Prince Rupert will look anything like the drawings presented  will be for the next ten years to tell!

Thursday night the audience at the Lester Centre and those viewing at home on CityWest were part of a Master's Class in urban planning, as Prince Rupert became the test subject for some expansive themes in city space creating.

Urban planner Larry Beasley, of Beasley and Associates provided for the tutorial of reinvention for the city, showcasing the many, very unique elements that will fit into the overall scope of change that will certainly make the city look very different by 2030, than it looks today as we head towards 2020.

Following a greeting of welcome from Alex Campbell, the evening began with Mayor Lee Brain speaking to the opportunity for a new beginning, offering another reminder to his frequent narrative as to how as a community we have turned a corner and are now moving forward. 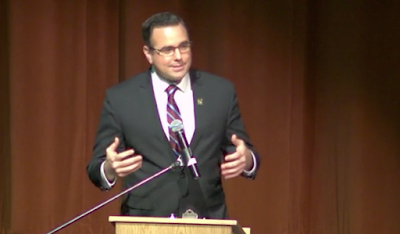 "So, tonight is about what happens when a community comes together as a team and what it looks like when collaboration joins and we are able to create a plan and results for our community that has been sitting in a place for twenty years that's been asking for a new beginning. And there have been many attempts to really kick start this community and really get it going. And I think by the end of the night tonight, it's going to be very clear to this community that we're turning a corner and moving forward" -- Prince Rupert Mayor Lee Bran introducing Prince Rupert 2030

Mr. Brain then provided for what would be the ongoing current of the evening, an emphasis on how partnerships and collaboration will be the often heard words for the next ten years, with the community required to come on board as active participants as the City and a range of stakeholder put the vision plan into motion.

That theme of collaboration and working together was reinforced by the city's partners and stakeholers in the initiative, with themes on the work of redesign rupert noted towards the common goal.

One after another came presentations from John Farrell of Community Futures of the Northwest, Shaun Stevenson from the Port of Prince Rupert, Johnathon Hebert from RayMont Terminals and Angela Kirkum representing DP World, with the Mayor delivering a statement of similar themes from Ridley Terminals. 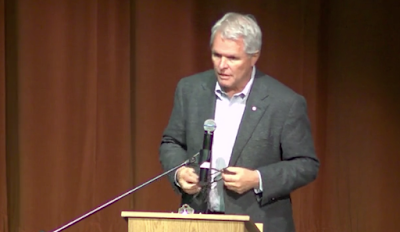 As Mr. Beasley took take the stage the full scope of what could be ahead began, a report 90 pages in length broken down element by element over the course of forty minutes or so, the project that was one year in the making was one of the fastest start ups that Beasley and his team have ever done.

He outlined how the vision plan would offer a fresh way to look at this community, reconcile differences and offer a different way to achieve the results they are looking to bring to Prince Rupert. 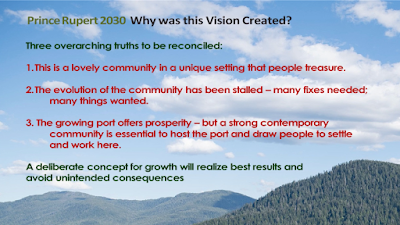 Towards delivering on that vision, Mr. Beasley outlined the key principles that will guide the process over the next ten years. 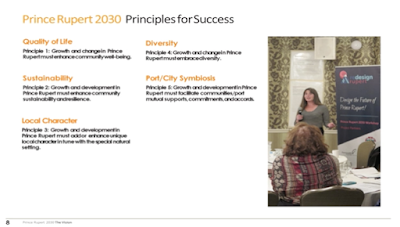 When it comes to the roadmap ahead, it will certainly make for a significant change as to what we find today, with unique districts created, consolidation in the downtown core and more use of the waterfront among some of the themes.

Among the areas that could be marked on a guide map by 2030 are a Marina District, a Lower Town and Upper Town, a Midtown and Knowledge and Innovation  Hub areas.

The current downtown core, or Upper Town as it has been reimagined, would be one of the centre pieces for the change that is anticipated. It will become a bustling urban space with new office spaces, with a strong suggestion that the Port take up residence in that newly invigorated space, serving as an energy force to bring change to the core of the city.

As well as the creation of more offices, a mix of retail and residential which would serve to redefine the historical area of the downtown, with Mr. Beasley observing how Councillor Niesh noted that the focus on Upper Town should be the first priority for the plan ahead.

Beasley also noted how the Upper Town area would be a place for First Nations of the region to bring their concepts and create service centres for the community and to interpret their culture to both residents and visitors alike.

For the waterfront, a new park in the Marina District, a Sunset Beach, expanded Cruise Dock capacity, a relocation of the Airport Ferry to where the Rotary Waterfront park is now as well as the development of a second marina in that location. 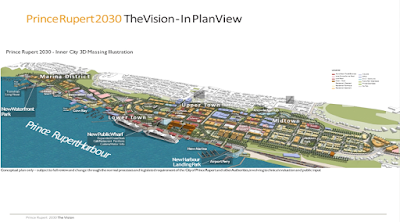 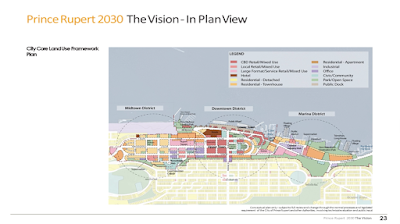 The future for housing also made for a significant portion of the vision plan, part of the eight building blocks for action, among the priorities to create a dedicated agency to kick-start the housing market, fill market gaps in housing in the community. 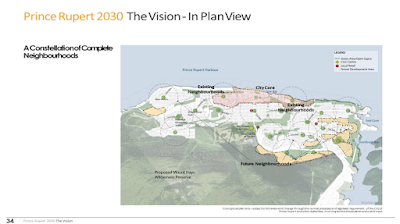 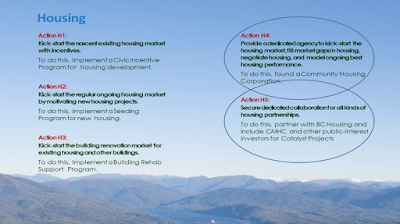 Workforce issues and workplace development, as well as rebuilding the retail core to the city also made for themes of note on the night. 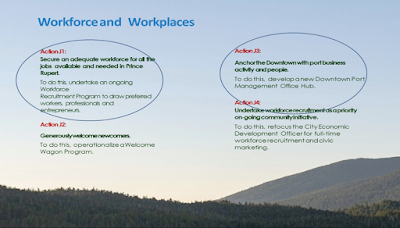 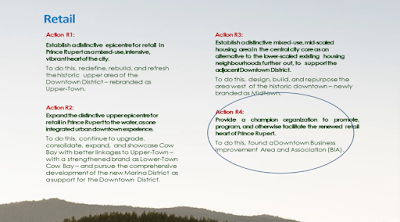 A review as to how to put the plan in motion over the next ten years provided a look towards the requirement of extensive placemaking and review of the Social infrastructure in the community.

Included in those themes, the creation of pocket parks, trails and other elements that will assist  in making the city a liveable space for residents. 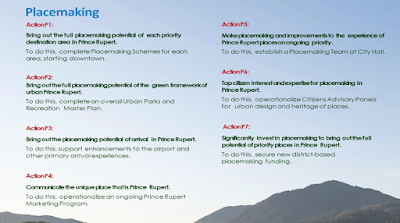 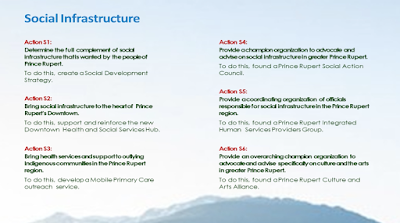 Community Infrastructure, Governance and environmental and wilderness desires brought the overview to conclusion, with Mr. Beasley noting of the desire to protect and access the wilderness areas as part of the evolution of the vision plan towards 2030. 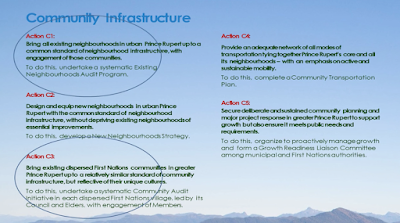 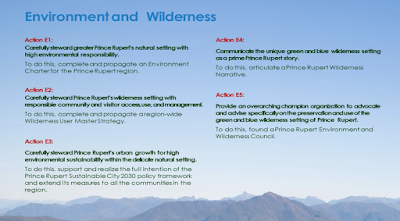 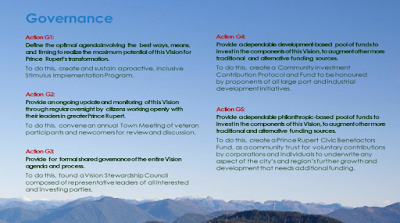 Should all of the elements come to arrive as previewed on Thursday evening, the transformation of the city and region will be much more than just redevelopment of actual land in the area, it will create a revitalized and re-energized community in ten years time. 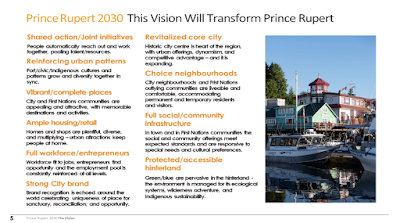 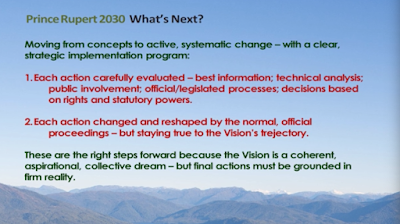 As Mr. Beasley brought his presentation to a close he provided for a synopsis of the road ahead and how the plan will require the participation of many more people that were in the room on the evening and how there will be a need to bring in all of the residents of the region, the industrial partners and First Nation communities together towards it.

He also observed as to how the plan will morph over time, and how it will become better and more resilient as the community moves through the processes that had been introduced on the evening.

The overview was somewhat overwhelming to try and digest in the scope of a one hour presentation and fortunately, through CityWest's community information streams, we can review the blue print online with the streamcast of the presentation available for review.

That offers a chance to focus on each of the elements and what is planned and how each of the moving parts will work in sync to create the city that has been envisioned by 2030.

The replay of the Prince Rupert 2030 presentation can be explored below:

The entire download of the Prince Rupert 2030 vision plan can be accessed here, from the redesign rupert website.

The glimpse into the future that could be in place in ten years time that came from Thursday's presentation was very much that of dreaming the dream; with a little less focus on expanding as to how the stakeholders will work towards the goals, or how the overall reach of it will be financed.

That process, much like the vision plan itself we imagine, will continue to evolve as the city and its new partners in civic development begin to work towards implementing the project.

The Vision plan as things turned out was just one element of the hour and half evening of information, with Prince Rupert Mayor Lee Brain then making for a string of announcements related to some projects that will soon be developed, as part of the new dedication towards collaboration.

We review those elements of Thursday night here.

An archive of all the media coverage can be explored here.

For more items of note related to the redesign rupert program see our archive page here.

(All images above were taken from the CityWest streamcast of Thursday's presentation)
Posted by . at 11:58 AM