With the approaching winds and Storm Warning in place in Hecate Strait, BC Ferries has delayed the departure of the Northern Expedition until Monday morning, with the 10 PM sailing of Sunday cancelled with the vessel to depart at 10 AM from Fairview dependent on the weather. 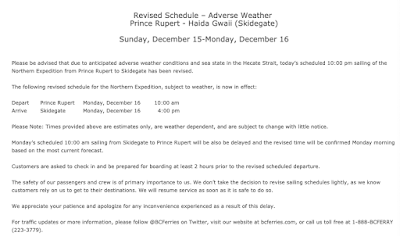 The change in schedule will also impact the scheduled sailing to Prince Rupert from Skidegate which will now come later in the day upon the Northern Expeditions arrival at the Haida Gwaii port.

For updates on BC Ferries service see their Service Notices page.

For more items of note on Marine Transportation on the North Coast and Haida Gwaii see our archive page here.
Posted by . at 11:02 PM

Email ThisBlogThis!Share to TwitterShare to FacebookShare to Pinterest
Labels: Northern Expedition sailing delayed until Monday AM