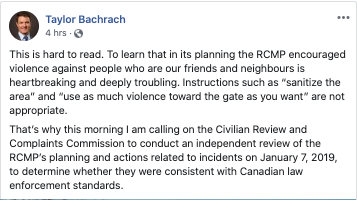 Comments from MP Taylor Bachrach posted to his Facebook page on Friday, along with a call for a review by the Civilian Review and Complaints Commission to investigate the RCMP handling of a blockade in the Wet'suwet'en territory last January has made for a weekend of some at times heated rhetoric and accusations from many sides of the followers of the MP's social media stream.

The MP who as we noted on Friday, seems to have made his call for the inquiry based on an article from the British publication The Guardian and does not appear to have sought out the RCMP for any comment on the story. 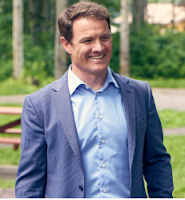 And for many that have weighed in on the theme over the weekend, that has made for a troubling element of Mr. Bachrach's approach.

Others have taken Mr. Bachrach's use of the story and facebook page posting to take the Guardians story as the definitive word on the events of January 2019, as well as to bring  on a range of other concerns and complaints about the RCMP from the past, many with little in the way of documentation.

Both are themes which only seems to serve the cycle of shouting currently underway on the MP's social media platform.

When Mr. Bachrach pushed post on his Facebook commentary of Friday, he did so seemingly without having sought out any clarification from the RCMP, instead basing his views and his call for an inquiry on the one singular article from the Guardian, a paper he referred to as a reputable publication.

And while he is correct on the  theme of the Guardian as a global paper with a reputation for its work, of late the British paper has been one which is at times quite activist driven.

They often offer narratives that certainly take to a specific tone and in the case of the Wet'suwet'en story is based on a fair bit of material that only the reporter has apparently seen, with no documentation provided in his work to go with it.

Global BC spoke to the RCMP, something that the MP apparently didn't attempt, and in a story posted over the weekend, the federal police force observes that the story is based on documents that they haven't seen and how some of the Guardian observations may have been taken out of context.

For the CBC, an RCMP spokesperson observed that they had not had opportunity to verify the documents the Guardian had based their story on and that the RCMP had been denied a request to review them

When it comes to how the RCMP is approaching the situation, the Force should probably have provided for a more formal statement for the public than merely a few comments for reporters, who are reporting on a story.

For their part, the RCMP should deliver some form of review of events that could be provided for proper consideration by the public.

As for how Mr. Bachrach has chosen to approach the topic, the MP is well within his rights to call for a civilian inquiry in the RCMP handling of any case file and it's an approach that many would accept if done properly.

But before doing so, he should probably seek out both sides of the incident in question, examine whatever notes they have to offer and then make a decision on the next steps to take.

In effect, the MP has taken to his Facebook page to say "I read a thing, from a guy who heard/saw a thing ..." that's not exactly researching an issue that can clearly be a divisive one in the community he has been elected to serve.

Basing a decision on one story which alleges a lot, but doesn't provide any background on the material that they are using towards the allegations, is something he and we, should all give some second thought towards before acting on.

It is a significant story of note that the MP could have expressed his concern on when it comes to the various troubling themes presented from the it, as should we all.

But, as our federal representative in Parliament, he also should have observed that he would be contacting RCMP, as well as federal and provincial officials to explore the situation further; that before inflaming tensions through a response mere hours from the publication of the singular story.

He need only review the growing list of comments, some of them rather incendiary to see how much weight his words can carry and how he needs to be sure that he has examined all sides of a story or a report and heard from all the participant before taking to social media

Particularly before taking to one of the the planet's most incendiary public forums.

If Mr. Bachrach's goal as an MP is one to build bridges across the Northwest, he may well have to start by looking to see if he needs to repair more than a few of the ones he may be at risk of having damaged on his own.

Update: The RCMP have posted a response to the Guardian article you can review it here.

For more notes on the work of the MP from Ottawa see our archive page here.

Email ThisBlogThis!Share to TwitterShare to FacebookShare to Pinterest
Labels: Bachrach on Guardian story