Capital project tutorial "paves" the way to 2020 for City Council

Professor Bomben was in the house on Monday, the City's Chief Financial Officer Corinne Bomben providing for much of the evening's presentations and updates on all things financial, with a particular focus on the 2020 Capital project and purchase roll out.

Ms. Bomben's report on the Capital Project planning serving as a bit of a tutorial for Council and those in the community watching in, offering a glimpse as to how the Finance office puts together its blue print to finance the range of projects and acquisitions on the horizon for 2020.

To begin her presentation, the CFO provided an overview of some of the programs planned for the year ahead and how they will be funded using a mix of grants, dividends from Legacy Inc. and potentially the taking on of debt.

She provided for a check list of some of the key projects set for a start or delivery once the calendar flips to 2020.

Work on the Second phase of the Woodworth Lake Dam
Planning for the Water Treatment facility
Work on the plan for treatment of the City's Liquid waste, with mapping of the pipe network
Completion of the landfill leachate lagoon, with new cell creation work to get underway
Replacement of Boilers for the Recreation Centre complex
Examination and assessment of the city's bridges according to an assessment schedule
Arrival of the new city multi-purpose garbage dump and development of a plan for curb-side recycling
An expanded paving program for the year ahead with an increase to $850,000 for 2020

Following the overview, the Council members offered up a few questions for Ms. Bomben, with Councillor Cunningham taking note of the paving planning for next year.  With the Councillor asking if there were any grants available to address the poor road infrastructure that is found in the city so that the City could expand even further on its remediation plans

Ms. Bomben noted that there have not been any grants made available in the past towards paving, with the Mayor noting that the good news is that the city continues to increase the amount of money that it is putting towards paving.

Councillor Adey, noting some of the larger items on the horizon, spoke towards concerns the public may have towards the idea of debt towards some of the capital requirements, observing how the debt that the city is taking on is more of a manageable part of the budgetary process.

Towards those themes,  Ms. Bomben confirmed the councillors view, noting that some of the debt that is planned will be funded through Legacy dividends and other instruments such as revenues through Watson Island.

She did acknowledge that some of their projects could require the use of debt, which can be accessed through the Municipal Finance Authority and how the funds required for the water projects won't be levied through water fees.

Councillor Cunningham expanded on those themes, observing that the debt won't affect the level of taxation, owing to the use of the Legacy dividends and other options.

Ms. Bomben expanded on the steps that the city takes when it comes to servicing debt, noting how any rise in taxation is usually the last stage they would make use of should they not have other sources of income to bring the budget down to zero.

The CFO reiterated that she hoped that there won't be any additional taxes required for any debt that may come from the large major projects of a general operation nature.

When it comes to bringing in revenues, both Councillor Niesh and Councillor Mirau offered their thanks for the efforts of staff, with Mr. Mirau also noting that the city isn't planning to raise fees even though the city is still in lean times.

He also observed as to how things are getting easier as more revenue comes in from Watson Island.

Mr. Mirau also pointed to two investments that the city may not have been able to tackle in years previous.

The councillor putting the spotlight on the work planned on the Recreation Centre boilers and how it will save the city money and reduce energy consumption; as well as the plans to move ahead with delivery  of their curb-side recycling program which could cut down on the need to develop landfill space.

The curb-side recycling plans still be a bit of an in progress project, with few details shared with the public so far as far as a timetable, though the purchase of the new garbage truck which will be delivered in 2020 does offer the capability to move forward with curb side recycling options.

You can review Ms. Bomben's presentation to Council from the City's Video Archive starting at the  25 minute mark.


And while the thumbnail guide to how the funding of major projects and purchases was instructive, two themes that the council members brought up often could use a bit more of a review by them sometime in 2020 and hopefully before the budget process starts prior to Spring.

The frequent mention of the use of Legacy Inc. funding and revenues generated through Watson Island are both of high interest and still somewhat mysterious for city residents.

Particularly as how Council has not made mention of either very much in public sessions over the last few years. 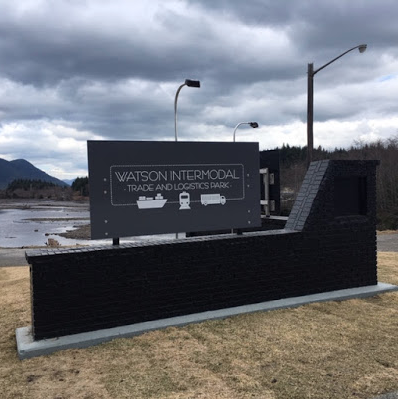 The last real update on Watson Island came in April of 2018, at the Mayor's Hays 2.0 Update, where he described the industrial site as Prince Rupert's "ticket out of its difficulties and the city's golden nugget and place of opportunity".

That optimistic forecast following as it did the 2017 re branding of the island as a the Watson Intermodal Trade and Logistics Park  and with it the leasing of land by Pembina for it's LPG terminal.

Since then, Council has not revealed much on what is happening on Watson, or if they have had any success in bringing in any other tenants for the industrial land on the outskirts of town.

The Legacy fund gets even less public attention from the city's councillors, who haven't provided for much of a tutorial on how they make use of that supply of cash and how they decide to allocate it.

As well, with the LNG well seemingly having run dry for the North Coast, how the City may be looking to add to its asset portfolio still remains pretty well a behind closed doors kind of conversation.

Perhaps a more expansive public review of how those two elements, which seem to be key to funding many of the city's capital project and infrastructure ambitions, could be offered by City Council as we head into the budget preparation work in 2020.

That conversation could make for a helpful bit of information for residents, particularly should the City decide that they will have to go the public to authorize borrowing in 2020 as they look to tackle some of the larger infrastructure and operations requirements ahead.

Further notes on the Monday night gathering can be found here.

Some of our previous notes on both the Legacy Fund and Watson Island, few as they have been,  can be found below.