Collaboration the focus for Prince Rupert 2030 Announcements, setting the template for the future as program of civic renewal moves forward

A string of announcements as part of Thursday's Prince Rupert 2030 vision plan presentation, served to put into visual context the goal of increased collaboration in the region that made for the over-ridging theme of the night.

That as Mayor Lee Brain introduced four initiatives that worked in some concert with the wider vision presented on the night. Complete with signing ceremonies, the Mayor spoke to the new spirit that he hopes to bring to the community as he welcomed each of the stakeholders to the stage to outline the joint announcements.

"We are looking at nothing short of a full scale mobilization of this community, to accomplish something of that magnitude is going to require all hands on deck ...  Tonight we wanted to be able to showcase to you some of those plans and show you that this is reality, because we're all from Prince Rupert and we all know the saying of "I'll believe when I see it" ... But tonight its time to believe it, it's time to walk out of here tonight updating our minds that this town is moving forward, it's time to change the narrative of the negative self talk into a positive can-do attitude it's time to really band together to make this happen, cause we're going to make it happen and tonight you're going to see it happen"-- Mayor Lee Brain on the path ahead for Prince Rupert 2030

Towards delivering on the vision, the Mayor outlined his first announcement of the evening, noting how the City and stakeholder partners had hired on some  experts, as well as to create a Vision Stewardship Council,  a co-governing body which will work on terms of reference, how the funds will be established and all the working elements of the program, with plans to have the First Nations involved in the process as it evolves. 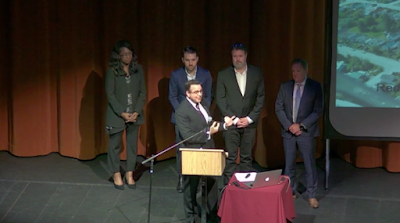 While outlining the scope of duties that will be taken on early in January of 2020, the mayor did not provide any indication as to the salary or funding cost for City Council and city residents, nor did he share how those costs will be shared as part of the new plan ahead.

As well the Mayor observed that starting in January the city and stakeholders would be launching its process to update the Official Community plan , bringing in additional expertise, high level folks as he described them,  to work towards development of the new OCP. With the mayor noting how there would workshops and community engagements to lay the foundation to make the program a reality and how 2020 would be a very active time as they work toward revising the community plan to integrate the Prince Rupert 2030 Vision elements. 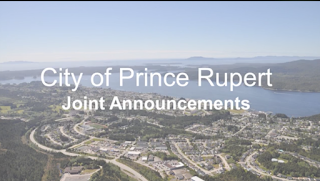 Among the four major announcements on the evening, two were a review of previously announced projects and two were new initiatives of items that had been on the city's wish list from years past:

Shaun Stevenson, the President and CEO of the Port of Prince Rupert provided for the overview of an ambitious redevelopment of Seal Cove, that as part of an environmental offest program related to the work taking place on the Fairview Terminal connector road to Ridley Island.

From the Seal Cove redevelopment, a new recreation space will be created, with lighted walkways around the lagoon in the area, pedestrian bridge benches and tables all creating a gateway to the Rushbrook Trail. 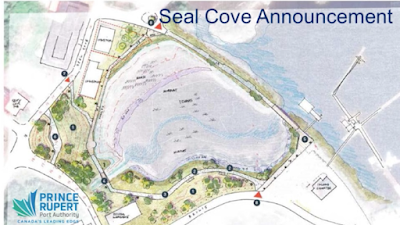 No timeline was provided as to when the project will get underway, or when its completion is anticipated.

The second presentation, provided for an update on a housing announcement from last year in Lax Kw'alaams with Harvey Campbell making note that following an agreement on funding for housing with the province of British Columbia, that plans are in motion to development of sixty units of subsidized and affordable rental housing in the City of Prince Rupert. 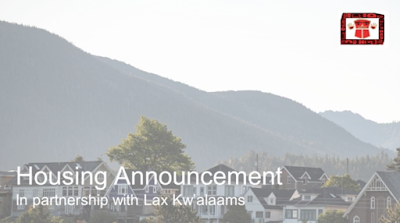 There wasn't much in the way of detail towards the project which will go somewhere along 11th Avenue, with Lax Kw'alaams set to introduce the proposal once the final design planning is complete.

Acquisition of Lot 9 in the Cow Bay area

City Manager Bob Long outlined the scope of an acquisition of land from CN that runs from the end of Third Avenue East past Rona and on towards the Rushbrook Area.  The area known as Lot 9 will allow for further development in what would be known as the Marina District. 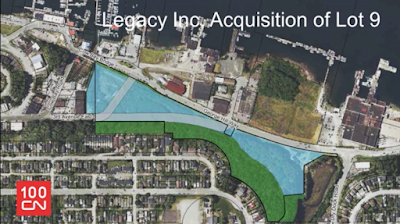 Noting how he believes that CN had seen the light and how the city has built a better relationship with the national railway with the potential for other projects for access of property for community use.

The City Manager however did not disclose too many details in relation to the acquisition which was made through the City's Legacy Inc program.

Calling representatives from the Kitkatla Nation to the stage, as well as members of City Council the Mayor outlined a program that is part of a desire for reconciliation, with the introduction of the redevelopment of the Waterfront Park area, which will be recreated as Rupert Landing.

That thirty million dollar project, which was first proposed in the winter of 2016, will feature a new marina, a relocation of the airport Ferry and dock space for the Kitkatla ferry as well as redevelopment of the immediate area of existing buildings and features.

The Mayor also noted that the city had just signed a new relationship protocol with Kitkatla, similar those signed with Lax Kw'alaams and Metlakatla this summer, adding that the City Council will be working closer with First Nations to push these projects through. 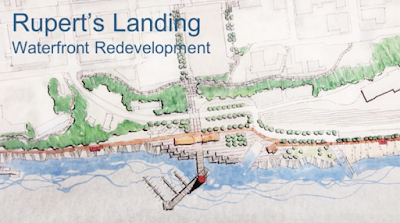 Kitkatla Chief Councillor Linda Innes spoke to the shared partnership that the project offers and how it provides for a confirmation as to how communities working together can achieve great things. 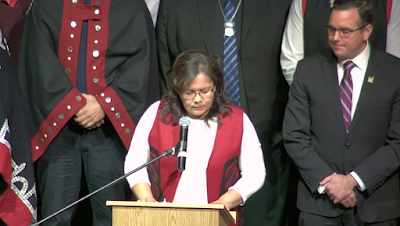 "The Rupert's Landing project is a milestone achievement that will transform Prince Rupert's waterfront, into a community space that supports retail, tourism and transportation for Prince Rupert, Kitkatla and all communities in the Northwest region"

There was no detailed explanation provided on the night, to outline how the 30 million dollar cost of the redevelopment will be shared by the partners. Though earlier this year, the City did seek out grant funding from both Federal and provincial sources towards the infrastructure project.

The Mayor also hinted at some other potential announcements to come, noting that he had one other announcement planned for the night but had to pull it back for now owing to some still to be resolved details.

He also put forward the prospect of more similar style announcements, some Downton incubation programs that he hopes to share in the months ahead in 2020.

While the evening was one of talk of partnerships, one partner it seemed was left out of the equation for the big show.

Considering how some of the announcements of Thursday involve provincial funding for housing or infrastructure, it was somewhat unusual that the area's MLA Jennifer Rice was not part of the presentation on the night.

An oversight that left out any indication as to the level of provincial participation that may be required, or requested as part of the goals for development of the program over the next ten years.

The presentations of each announcement can be viewed below, the roll out of each initiative starts at the one hour and ten minute mark.

You can review our notes on the Prince Rupert 2030 presentation here.

Further notes as the projects evolve could soon be found through the redesign rupert website.

An archive of all the media coverage can be explored here.

For items of interest on the redesign program see our archive page here, further notes from City Council can be found through our Council Discussion archive.

(All images above were taken from the CityWest streamcast of Thursday's presentation)
Posted by . at 11:59 AM

Email ThisBlogThis!Share to TwitterShare to FacebookShare to Pinterest
Labels: Announcements from Prince Rupert 2030