With more than two years having passed between updates, not much seems to have changed when it comes to policing the streets of Prince Rupert; that following a report to Council from the city's RCMP detachment on Monday evening.

Sergeant Baldinger of the Prince Rupert RCMP provided for the review for the Mayor and councillors on Monday, his report echoing many similar themes of one delivered by Inspector Blake Ward in 2017, with a focus on the level  of staffing, and Prince Rupert's status as a four year limited posting which makes for a 25 percent turnover in staffing each year.

Among the notes from the Sergeant was a look at the work of the recently resurrected two member Crime Reduction Unit in the Spring, which at the moment it is reduced by one member owing to a transfer, but should be back at full strength in the Spring of 2020.

He also outlined some of the work of the Victim Services office at the detachment, with referrals up from last years numbers . As well as to review the consultation process the RCMP has with stakeholders in the community.

He also made note of a new online service set to be introduced to Prince Rupert in the New Year, which will allow residents to submit their case files for incidents that don't require police attendance, covering such things as lost or stolen wallets, stolen property and other similar non violent incidents where a case file number may be required.

Sergeant Baldinger also explained how Stats Canada has changed the report of crime statistics to them, with the new format now focusing only founded and unfounded case files, which has meant an increase in the number of founded files which will have an impact on the level of Crime Severity Index recorded in the community.

He observed that in Prince Rupert there are not many stranger on stranger offences, with the majority of calls dealing with known offenders to the victims, he also highlighted how as the stats are based on a population base of 100,000 people it looks like we have a lot of property crime, which in fact is quite low in the community.

He also noted that because we have such a small population that if we have one or two stats that increase that spikes some of the statistics for the city.

Towards that issue he observed that in 2018 the results were a bit higher for property crime which he attributed to one individual that was linked to nine separate break and enters which spiked the city's results, observing that overall the level of property crime in the city is low.

That topic served as a lead in to his review of the recent Maclean's magazine survey on Crime in Canada, noting that there were no surprises with those stats and with the same trend found over the last few years. 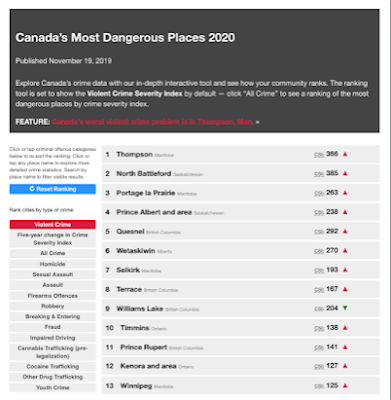 The Sergeant did observe that the stats are misleading as it doesn't capture the number of offences where the victim and offender are known to each other, as opposed  to stranger on stranger offences.

When it came time for their questions, the City's council members picked up on the Maclean's report of last month with some enthusiasm, with the majority of those who spoke seeming to dismiss the findings of the national magazine.

Councillor Nick Adey called on his experience as a school teacher to frame his thoughts on the Maclean's story and how it could shape the discussion on crime.

"As a thirty year teacher in the public school system, I've been dealing with the FSA assessments and rankings as a result of them, so I'm pretty familiar with the degree that these things can turn into something that they're really not"

Councillor Mirau concurred with that theme noting how he believed the report from the magazine had flaws, while Councillor Niesh dismissed the magazine's work by noting that statistics are all about what the author wants it to sound like.

Mr. Niesh further observed as to how the crime statistics can be skewed by one person causing problems in a small town. Adding that he doesn't take a lot out of articles as Macleans and how no one in the community or those visiting the community would consider it a dangerous town.

"I don't take a lot out of articles like Maclean's,  I think that anybody that lives in this town or visits our town would never feel that it's a dangerous place to be, that being said we obviously have problems and we need to work on our social problems"

When it came to questions, Mr. Adey, noted how the Maclean's article had generated some conversation in the city and asked if Prince Rupert was a safe place to be.

The Sergeant reinforced his comments of earlier as to how the majority of the violence found in town was between people known to each other, with few incidences of stranger on stranger violence reported.

Other themes explored by Councillor Adey who asked for a glimpse into some of the elements of policing that we don't see in the public eye.

In reply, the work of the Crime Reduction Unit was highlighted , putting some focus on how they build relationships with vulnerable community members and stakeholders, noting their work with MCFD, Transition House, the Schools, the Fire Department. Friendship House and Northern Health.

The ongoing situation of homelessness in Prince Rupert also made for some of the current of the questioning,  with that flagged by the Sergeant as one of the larger issues that the local members see in their day to day work, noting how a number of rental units have closed in recent years and how that appears to have put more people out in the streets looking for accommodation.

Councillor Cunningham followed up on that theme asking if the larger issues for the detachment were more social than policing issues and if so, would it help if provincial agencies increased their assistance on those issues.

The Sergeant concurred with that observation and responding further on the homeless issue he did observe that with a limited shelter availability there has been an increase in the amount of homelessness in the community.

Councillor Cunningham also observed how he believes its a myth that crime increases as the homeless population increases, the Sergeant noted that while he hasn't seen the stats on that comparison, he doesn't believe that the level of street crime in the city has increased with the rise in homelessness.

The full discussion between the Sergeant and Council can be reviewed from our City Council Timeline feature as well as through the City's Video Archive starting at the five minute mark of Monday evening's session.


Such was the focus on the Maclean's article and homelessness, that Council members never really explored many other themes. With no inquiries about what the response time is for calls in the city, whether the staffing levels at the detachment are sufficient to address the issues that the members face, or to dig deeper towards where crime is taking place and what trends we should be concerned about.

As well, Council let slip by a chance to make some inquiries about some of the many themes on policing in Prince Rupert that can be found through social media from recent months.

Councillor Adey did note that he was pleased to see the detachment in Council chambers for the presentation and how he hoped it would become more of a regular thing.

Should they wish to develop that kind of a timeline for 2020 and beyond Prince Rupert's council members may want to contact their fellow municipal officials in such communities as Terrace, Kitimat and Smithers,  all of which feature regular updates as part of their public council process

Also of note for possible use in Prince Rupert is a public listing of the case files that the RCMP in respond to, something that the Terrace detachment provides on a regular basis.

Having a similar online resource in Prince Rupert might help inform the Council members as to what the local detachment faces on a day to day basis and provide a helpful guide as what the issues of concern may be for the next time the two groups get together in a public session.

A look at the work of Emergency Responders in the Northwest can be found here.

While a wider overview of items of interest from City Council can be found on our Council Discussion Archive page.