Skis and Boards at the ready, but the snow isn't ready to go ... just yet


At two Northwest ski hills this week it's all about the weather watching as a wet but mostly snowless season so far, has put some delays into opening plans.

Skiers around the Northwest are getting some itchy feet, with the less than cooperative weather so far in December leaving the chair lifts, tow ropes and such idle as the two Northwest ski locations await word from Mother Nature that the season is on.

Shames Mountain in Terrace provided the latest update on the state of ski  last week pushing back their Opening Day to Saturday, December 21st, noting how the Northwest is but one good dump of snow away from a ski season ... weather Gods permitting. 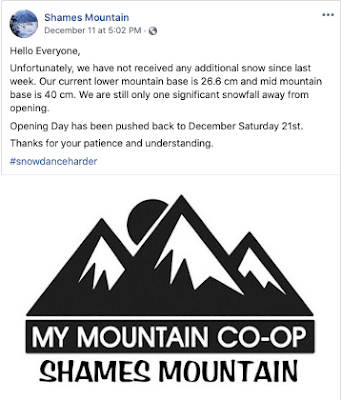 Things look equally optimistic four hours down the highway in the Bulkley Valley, where some recent snow is being groomed into a base for what could be a Wednesday opening for Hudson Bay Mountain ...

The folks at Hudson Bay Mountain offered up the hopeful prognosis on Sunday with note that an official announcement will be made on Tuesday as to whether the season is on this week. 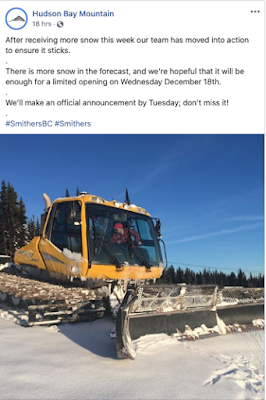