With the Special Events Society on the clock before eviction from the basement of City Hall, the local group that puts together the city's four large festivals each year, has turned to social media in their quest for a new home.

The need for new accommodation was outlined at the November 25th Prince Rupert City Council Session, when Bev Kilberry and Joy Sundin spoke as part of the Committee of the Whole process, making note of some of the frustrations and challenges that they have been finding as they try to find an new place to set up their office to continue with the planning of the community festivals.

At the time Mayor Lee Brain had noted that City staff has been working with the Society to try and find some local office space, while adding that the City values the work of the Society and the efforts that they put in for the community

"So I guess my understanding is that staff has been working pretty diligently trying to help get us locations ... and from what I understand some new ideas have emerged to talk to other places downtown and I think there is a meeting on Wednesday with staff to discuss some other opportunities that may be suitable for you guys as well. So I think that our staff is definitely more than willing to go the distance to help you guys find a proper location and somewhere that is going to be suitable for you in the downtown." -- Mayor Lee Brain on the search for a new office for the Special Events Society

However as the pair from Special Events noted at the time, that effort had not to that point found much success and judging from a recent social media post with the Prince Rupert and District Chamber of Commerce, that search has continued on into December. 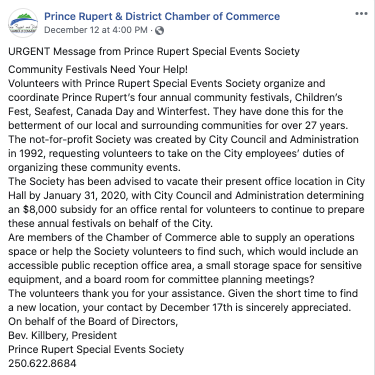 So far there has been no update from the Special Events Society to indicate that they have been successful in the search, so if you can help out you can give them a call at 250-622-8684.

The Society, along with the Prince Rupert Community Arts Council have been told that they need to vacate the basement of City Hall as the City say that they require the space and can no longer host the groups in the downtown space.

That it appears has come following four years of hiring of an increased number of staff members, as well as a desire to bring in the office of redesign rupert into the City Hall facility

You can revisit the discussion between the Mayor and the Special Events Society representatives from the City's Video Archive for November 25th, starting at the 22 minute mark.

At the November 25th session, City Council outlined that they had increased the amount of funding from the Community Enhancement Grant by 13,000 dollars for 2020, with the Society now to receive 30,000 dollars in funding and 12,000 dollars in in kind spending towards the work they do for the four community festivals through the year.

For more items of note on City Council themes see our Council Discussion page here.
Posted by . at 9:55 AM