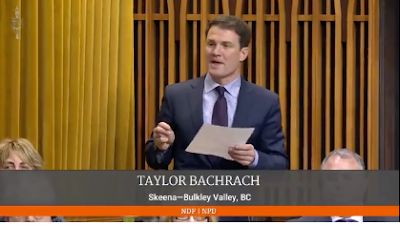 Skeena-Bulkley Valley MP Taylor Bachrach stepped into the House of Commons spotlight on Monday, making for his debut question for the government side, with the MP calling on the Feds to provide some support to the growing number of forestry workers currently facing a crisis in the BC forest industry.

Bachrach made note of the many shutdowns and stating how the Federal government is missing in action called for the Federal government's Employment minister to commit to coming to the province to meet with local leaders and to work towards greater flexibility to provide support to local families.

"But this year sawmill's shutdowns have created uncertainty for many families. Now thousands more workers will be without work over Christmas and the Federal Government is missing in action" -- Skeena-Bulkley Valley MP, Taylor Bacharach Monday in the House of Commons Question Period

And while the forestry issues as Mr. Bachrach noted are having an impact on many in the Northwest, it's not the only industry that is finding some serious challenges in the region.

Those in the fishing industry and communities that have seen some hard times for a number of years now, are probably hoping that the newly elected MP doesn't forget about their plight, considering the strong volume of votes delivered to him during the October election period.

Mr. Bachrach also delivered another update on his work from Ottawa through his Facebook page, making note of his House of Commons debut and some of the behind the scenes elements surrounding Question Period and expanding on his concerns over the forestry crisis in the Northwest.

He also made note of a situation on Haida Gwaii surrounding the Sandspit Inn and plans from the government to shut the location down and demolish the building, noting that he plans to address the topic with the government to seek alternative solutions.

You can keep up with some of his work in the national capital from our House of Commons Archive page.
Posted by . at 10:00 AM