One of the much promised big announcements from Mayor Lee Brain for last night's Prince Rupert 2030 Vision plan roll out, was a look at some planned re-development of the Seal Cove area of the city's east side, with the Port of Prince Rupert to be the lead developer for a new recreation area in the Seal Cove slough area.

As outlined last night at the Lester Centre, the project will provide for a walking trail around the slough, a new bridge and other recreational elements making it a natural gateway to the Rushbrook Trail.

Today, the Port expanded a bit on those plans, which will be used as part of the Port's plan towards offsetting the impact of the Fairview Connector Road between the container terminal and Ridley Island.

The Port noted that through the partnership with the City of Prince Rupert,  they have found a way to leverage its investment in habitat restoration to contribute to community amenities in the vicinity of the Seal Cove Slough.

This habitat compensation project will include the development of new marine riparian areas, intertidal marshes and mudflats, eelgrass beds, and other shoreline planting, and will also serve to enhance visual appeal and feature environmental education components.

It will encompass a lighted pathway around the slough, a pedestrian bridge, benches, tables, and interpretive signage, becoming another community waterfront asset.

Port development is required to mitigate environmental impacts wherever possible and where mitigation is not possible, compensate for habitat loss through habitat creation or restoration projects.

These habitat compensation projects, also known as ‘offsets’, are designed to exceed the productive capacity of the habitat they are replacing or impacting.

PRPA has an obligation to create and restore the marine habitat impacted by the construction of the Fairview-Ridley Connector Corridor and, working with the Department of Fisheries and Oceans, has identified the restoration of the Seal Cove Slough as an ideal project to achieve the habitat enhancement objectives of its compensation program. 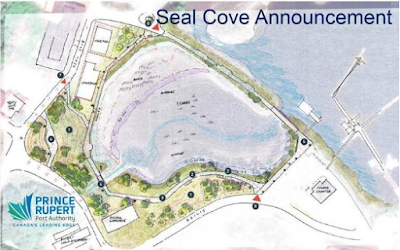 Shaun Stevenson, the President and CEO of the Port of Prince Rupert noted how the plan towards environmental sustainability, will work within the Prince Rupert 2030 vision plan.

“Environmental sustainability is a core value of the Prince Rupert Port Authority and this habitat enhancement project will reinvigorate an area impacted by historical industrial use while creating new recreational waterfront access. This project builds upon the direction set by the Prince Rupert 2030 Vision and compliments past PRPA investments in community waterfront access made over the past two decades, including Atlin Terminal, Northland Terminal, Cow Bay Marina, Atlin Promenade and the Rushbrook Trail.”

For the City of Prince Rupert, Mayor Lee Brain observed as to how the project supports the goals of building partnerships and improving the quality of life in the community.

“Seal Cove Slough, located near the Coast Guard and seaplane base on the northeast waterfront, presented a unique opportunity for the Prince Rupert Port Authority and the City of Prince Rupert to work together. The Redesign 2030 Vision has identified opportunities for partnerships to deliver projects that will make a difference to our quality of life and our future growth, and we are excited to see some of those opportunities already starting to take shape through commitments from the Port and others.”

No timelines related to the redevelopment plan were released by the Port, or the city today, with the announcement mostly an overview of the notes from Thursday night.

Further details on the Seal Cove project, as well as review of some of the other habitat compensation projects that the Port has taken on in the region can be explored here.

Mr. Stevenson's presentation at the Lester Centre can be explored further from our notes on the string of announcements from Thursday night here.

For more notes on Port of Prince Rupert initiatives see our Port archive page here.
Posted by . at 4:04 PM