A road that will be out of sight, will change the feel of Prince Rupert's downtown area significantly


Yesterday's funding announcement by the Federal government that will see close to 22 million dollars invested into port infrastructure  moves the Fairview connector road project forward, with the two lane restricted road set to help relieve a good portion of the traffic burden of Prince Rupert's downtown core once it is completed.

Port CEO and President Shaun Stevenson provided a snapshot Wednesday of the impact for the community when it comes to the new road that will connect the DP World container facility and the range of logistics facilities on Ridley Island and elsewhere on the outskirts of the city.

"This investment represents the creation of a dedicated road and corridor that will move all that trucking activity out of the downtown core and connect to port lands that are being used today for logistics activities, but also plan for the future"

Mr. Stevenson also made note of the importance of the investment that the new road will have on the environment in the area and the partnerships it forges with area First Nations.

"The investments in this connector road and rail corridor serve to improve the safety of the trucking activity but also reduce the environmental impacts of that trucking activity, it will reduce greenhouse gas emissions by 75% and create a dedicated haul corridor between logistics lands and the terminal. ...

There's been a lot of reference to partnerships, and I can't say enough about it and one of the most  important partnerships is the partnership we have with local First Nations, and we're excited this project is actually going to be built by Tsimshian contractors which creates another level of economic opportunity for Prince Rupert and its residents. 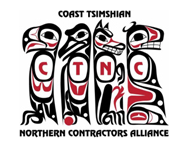 Construction of the connector road has been contracted to a local First Nations joint venture, the Coast Tsimshian Northern Contractors Alliance, which is expected to start work on the 100 million dollar project in the first quarter of 2019.

In addition to the two lane private haul road, the project will also provide the platform for two new rail sidings that will run along the roadway.


As part of his comments for the announcement of Wednesday, Prince Rupert Mayor Lee Brain spoke to how the creation of the road corridor between Fairview and Ridley will lead to opportunities to develop the city's downtown area.

"We've heard nothing but complaints about the downtown core, about the truck traffic, the safety concerns, everyone's been hearing that. This is going to completely redirect the traffic and be able to have new development opportunities for downtown.

One of our issues with redeveloping Prince Rupert is that the downtown really has been a hindrance in terms of quieting it and being able to attract investment that we need because of the amount of traffic that goes through there, this is going to completely eliminate that and I would like to thank the Federal government and the Port for realizing that vision"

The connector road is the first phase of what appears to be a wider scale plan for development of land both on Ridley island and along the Ridley Island Road that leads to highway 16.

Mr, Stevenson provided the first heads up on some of those concepts as part of the Port's Annual public meeting back in June of this year.

For more items of note related to the Port of Prince Rupert see our archive page here.

To return to the most recent blog posting of the day, click here.
Posted by . at 9:09 AM