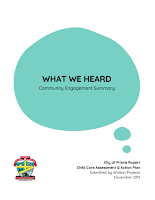 The City of Prince Rupert has provided a sneak peek at what will be a larger report to be delivered in 2020 that examines the state of Child Care in the community and where the City looks to go towards an Action plan for the years ahead.

The preliminary look provides a snapshot of some of the findings from the recent Child Care Survey conducted by the City which asked a range of questions to determine the state of child care in the community and to hear what residents are looking for towards the future.

The process began in August with a survey period taking place over two months through the Rupert Talks platform, with paper copies of the survey available at a number of locations around the city.

With the initial indications providing for a few areas for the City to take note of prior to the release of the full report, among some of those notes that were highlighted in yesterday's introduction to the preliminary notes:

That there are limited licensed care options outside of traditional work hours to accommodate shift workers; there is a lack of a centralized registry of available licensed spaces; and although child care costs were identified as a challenge, there is low awareness of current child care benefit eligibility to reduce costs. The study also noted space shortages for infants and toddlers, especially, as well as inability to recruit/retain child care staff as a major barrier to service provision.

The project was launched with the assistance of 25,000 dollars in grant funding from the Union of British Columbia Municipalities.

When it comes to the data review offered up, the city highlighted notes on the lack of daycare outside of traditional hours, the shortage of spaces available in the community and the issues of retaining staff in the community to deliver those services, as some of the key take aways. 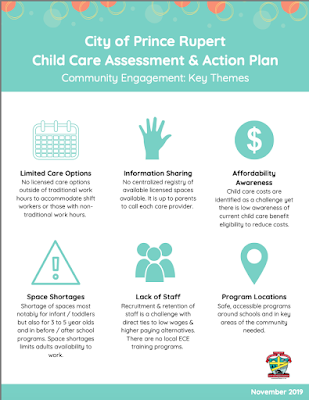 The community engagement process to date on the themes of Child Care has seen submissions through 15 one on one interviews, 71 Child drawing submissions, 132 parent surveys and 10 Child Care provider surveys.

When it comes to what is expected of the city when it comes to Child care, respondents noted that the City Should become a community champion and leader for child care needs as well as to provide child care space in a civic facility.

Among some of the themes on Child care that the city should explore were:

Build community awareness by communicating where parents can go to access child care.

Inventory and assess the empty buildings in the community for suitability for new spaces.

Use City-owned buildings to, directly and indirectly, create space for child care and programs

Look at our streets and neighbourhood safety, particularly where child cares spaces exist.

The findings of the preliminary report can be reviewed here.

As part of the community engagement, some prizes were awarded to a pair of participants in the survey process.

With the City offering Congratulations to  Sara White, a local parent who won the survey prize draw for a $500 RESP for her child, generously donated by Northern Savings Credit Union.

Participant Alicia McDowall also won a one-month Recreation pass to the facility for herself and her family.

The information taken from the survey will help towards the creation of the Draft Plan which is anticipated to be delivered for public review in February of 2020.

The city notes that the plan will be a valuable resource for the City, child care operators, employers and community partners to use to proactively address and advocate for local child care needs.

In addition the city observes as to how it will be a key document to assist local applications for the recently announced Childcare BC New Spaces Fund, where Prince Rupert is eligible for up to $3 million in space creation funding.

For more items of interest from City Hall see our Council Discussion archive.