It will be a wet and windy weekend for the North Coast and Haida Gwaii with Environment Canada issuing a Special Weather Statement for the region just before 1 PM Thursday.

The Statement outlines the path of a trough over the Pacific that will direct Strong Southeasterly Winds to both Haida Gwaii and then the North Coast in the Friday night, early Saturday period.

Periods of rain will come with the approaching system and for inland areas of the North Coast that will mean Snow for Terrace, Stewart and other points somewhere towards 10 to 15 cm, along with the snow is the chance of freezing rain during transition periods. 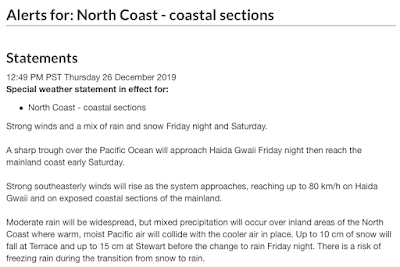 As the Pacific front arrives, road conditions can change quickly, you can access the latest road updates across the Northwest from the Drive BC website and twitter feed.

As well as from the list of Video cameras along the routes, though at the moment, the Terrace area cameras are all out of order. 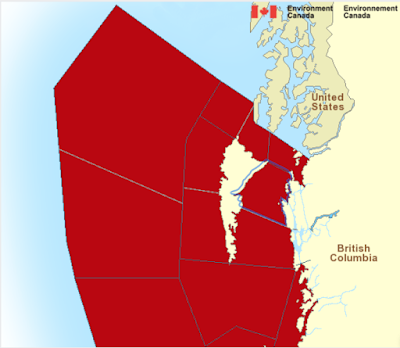 The front will also make for nasty weather on the water, with Storm Warning now in Effect for all areas  of the Hecate Strait. Winds from the SE to 45 Knots are being experienced at the moment,  diminishing overnight, only to build again to SE 55 by Friday evening.

Seas will build to 4 metres into Friday evening 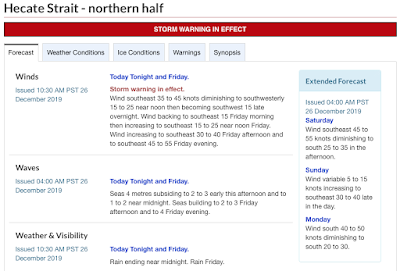 The latest notes on the marine weather can be explored here.

For past notes on the Weather on the North Coast see our archive page here.